In a politically divisive age do 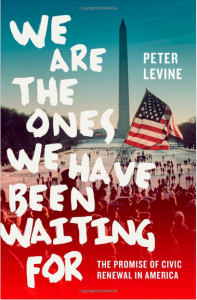 minated by big data, technocratic public policy, and partisan gamesmanship, Peter Levine offers readers a new take on that old favorite: civic participation. Levine calls for a form of democratic engagement that involves citizens “talking, listening in reasonably diverse groups about public issues, collaborative work, and the strengthening of civic relationships.” Despite its lofty title, Levine’s We Are the Ones We Have Been Waiting For: The Promise of Civic Renewal in America is actually a sober assessment of the political possibility of civic engagement, and despite the massive challenges of "wicked problems" that Levine names—school failure, climate change, mass imprisonment­­— there are no grand government plans, ideal utopias, or quick silver bullets. Neither is there finger pointing or shaming. Rather, Levine,  director of the Center for Information and Research on Civic Learning and Engagement at Tufts University,  poignantly argues for civic engagement and public dialogue as a way to begin addressing our most pressing issues.

At the core of Levine’s book is the idea that democratic deliberation is an intrinsically valuable activity that engenders citizen ownership of public problems and collective action to address them. Defined as listening and learning, deliberation for Levine is a shared activity that fosters reasoned and reflective civic engagement. It is the animating energy of a civil society “composed of networks and associations in which there is relatively high frequency of actual listening among people who do not start by agreeing.” The importance of a strong civil society underpins much of Levine’s argument throughout. Following Robert Putnam’s famous conception of social capital, Levine reiterates the importance of our most basic civic institutions — churches, clubs, and organizations — in fostering community relationships. These relationships engender civic trust and dialogue in and across diverse populations. For Levine, a healthy civil society facilitates public engagement that is needed to address society’s toughest problems.

Significantly, individuals need each other to figure out solutions to common problems, rather than simply relying on outside expertise, markets, political ideology, or government intervention — a common mode of politics today. Levine argues that moral reasoning is a collective endeavor of overlapping and shared "moral networks" that needs to be fostered systematically via public discussions and workshops. Levine’s framing of public discussion as a shared activity also embeds democratic deliberation within everyday community life in order to engender civic loyalty and motivation.

Levine’s emphasis on shared values and experiences is refreshing and needed in a political culture defined more often by wars than civility. Yet Levine is slow to point out which values are worth pursuing, even though he is keenly aware that a community can have the wrong values. At times, he calls for Kantian autonomy and notions of equity and minority rights. At other times, he advocates for a contradicting pragmatism that has little chance of forming the moral commitments he desires. More, certainly, could have been said about values and moral frameworks, but given the scope of his project, it is a forgivable shortcoming.

Once Levine establishes the significance of public deliberation, citizen engagement, and civil society, he spends a substantial portion of his book addressing the facts and strategies of civic renewal. Like most citizen theorists (and pretty much anyone else interested in American politics), Levine is troubled by the current climate of American democracy. A trove of data and research supports his worries of a declining civil society. In turn, Levine names two culprits: income and spatial inequality and mid-twentieth century federal reform. Referring to what is called  “the big sort,” Levine points to a growing trend in American society — the geographical segregation of people based on class, race, and political ideology. With fragmentation comes the loss of diverse polities and intergroup dialogue.

The other significant factor Levine names is the transformation of American governance over the past century. According to Levine, in the 1960s and 1970s, Congress passed a series of reforms that “created or gave new powers to at least one regulatory agency that would then begin to govern in a routine sense. In turn, the administrative agencies tended to delegate their powers further down, to various boards and committees that were forums for negotiations among stakeholders.” Subsequently, landmark legislation could be passed only on occasion and would require massive national advocacy and a cadre of well-paid professional lobbyists.

This passing of the buck created a government culture of special interest bureaucracy and citizen disempowerment. In response, Levine argues for a political alternative of “pragmatic, decentralized, participatory government,” run by “small, overlapping, participatory bodies,” and undergirded by a public philosophy of pragmatic policymaking and experimentation. Unfortunately, Levine does not spend much time fleshing out this political philosophy and its arrangements. A more robust articulation of this decentralized vision would help clear concerns and worries of practicality and social complexity. After all, the argument today for our massive federal institutions is the sheer scale and diversity of the problems facing our polity.  America has a long history with federalism for a reason.

Levine provides several examples and strategies for galvanizing citizenship, arguing for more open-ended discussion, stronger civic ties, and localized forms of democracy. He lists several national organizations that are citizen centered and concerned with community development. Interestingly, most of the illustrations that Levine relies on to push his thesis are city-or community-specific, such as Washington D.C’s Citizens Summits or Hampton, Virginia’s Youth Commission. These examples illuminate a tension between the local and national running throughout. In other words, Levine clearly desires a national renewal of citizenship occurring on all levels of the government. Yet it seems that the best case for civic revitalization occurs at the community, city, or even regional level. It is certainly easier to define and narrow in on public problems in those places. Addressing larger national problems is harder, though Levine points to several organizations that are trying to do just that. It would have been helpful if Levine had had more clearly distinguished between national and local forms of civic engagement and the challenges inherent in each.

Levine offers a rich account of citizenship and civil society that goes all the way back to Aristotle yet updated for contemporary audiences. Though Levine underplays certain challenges facing American society, his call for civic renewal based on shared practices, public dialogue, and common problems is fresh and timely and not wholly removed from the goals of Thriving Cities Project. Ultimately, I am skeptical of a renewal of citizenship deliberation occurring in national politics,  and I question even the practicality of his program given the scope of our problems. Yet, his insights are helpful to anyone interested in seeing local communities and cities ultimately governed by the people and for the people.