Faith in the City: Part II, Will the New Urban Evangelical Change Cities? 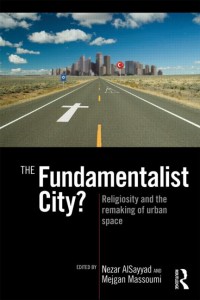 Those intrigued by the apparent shift among evangelical Christians toward a greater emphasis on cities would be well-served to read a fascinating collection of essays edited by Nezar AlSayyad and Mejgan Massoumi in The Fundamentalist City? Religiosity and the Remaking of Urban Space. According to AlSayyad, the project was an attempt to study “the relationship between fundamentalism as a concept and urbanism as lived reality.” It was an ambitious interdisciplinary effort with a global scope—encompassing case studies among urban Hindus, Jews, Muslims, and Christians, including American evangelicals—in light of “the unanticipated resurgence of religious and ethnic loyalties [that have] given new meaning to religion in the public life of many communities.” One result was Omri Elisha’s article, "Taking the (Inner) City for God: Ambiguities of Urban Social Engagement among Conservative White Evangelicals," which sheds some light on what is driving the new focus on cities among American evangelicals today:

Renewed engagement in the field of urban ministry on the part of suburban evangelicals entails both the realization that the fate of the city is irrevocably tied to their own, and the recognition that the city remains a problematic place where they do not intuitively belong.

Elisha points to the evolving nature of the evangelical view of the city. Previously the "progressive" lifestyle, temptations, and crime of the modern city made it an unappealing place to live for many evangelicals. Some evangelical leaders would even compare it to the biblical cities of Sodom and Gomorrah. Over the past decade, however, and especially with the younger generation, this has begun to change. New urban churches are springing up across the country. This pattern can be seen in the “fundamentalist” strands within many of today’s world religions, as other chapters in The Fundamentalist City show.

This new, softer image of the urban evangelical, who offers service to city dwellers with no strings attached, has been difficult for some to accept. For example, in reaction to Joy Allmond’s article (see Part I of this series) that claimed evangelicals were leading a New Great Awakening in New York City, Anthony Bradley asked, “Are evangelicals really that important?” In an article for the Acton Institute, he made the case that religious communities other than white (formerly suburban) evangelicals might see things differently:

After reading Allmond’s article one might get the sense only evangelical Christians are thriving in the city. But what about the Roman Catholic, Eastern Orthodox, Mainline Protestant, traditional Black Church, Latino/Hispanic, and Asian/Asian-American congregations? Many of those churches have been far more active in New York since World War II than evangelicals have been. It seems to be if God was going to ‘awaken’ New York, or any major city west of the Mississippi River, he would do so by using a coalition of Christians across the traditions who are already there to bear witness to work and person of Christ.

It is hard to argue with Bradley on this point. He and many others are waiting to see if the new urban evangelical movement is going to make a lasting impact on cities. It seems the real test will be whether evangelicals consistently partner with "Christians across the traditions," who, unlike many evangelicals, stayed in the inner city and consistently maintained ministries to the urban poor.

A larger question in all of this is the extent to which religious groups should be taken seriously as a force for positive, lasting change in cities. More than ever, faith communities need to be part of the conversation when it comes to urban planning, capital expenditures, educational priorities, and other decisions of lasting impact upon a city. Far too often over the past century the major decisions that have left a legacy on cities—from the built environment to the landing of big business deals—have been made by a very small club of individuals, in which religious leaders have either been denied entry or refused to join. This needs to change, and perhaps the new engagement of evangelicals in cities is a positive sign that this is already happening. Looking at this issue globally and inclusive of other faith traditions can again shed light on the changing significance of religion in cities. In an article in The Fundamentalist City about what she calls "post secular urbanisms" in Delhi—where Hindus, Muslims, and Christians have played an important role—Mrinalini Rajagopalan gets to the heart of the matter:

Conventional definitions of modernity have relegated religious belief to the realm of the private and have attempted to abrogate its public appeal by privileging scientific temper and rational thought…. Undoubtedly, and like many other imaginations of modernity, this is an artificial divide that has been questioned by those who offer valuable insights into alternative or multiple modernities.

The usual suspects in city leadership need not fear faith communities and would do well to give them a seat at the table when it comes to those important decisions to address their city’s problems. An important study by Cardus, a think tank in Canada, has recently shown that the key to success is to “improve structural engagement” between “faith based organizations and city planning departments.” Will city leaders in the US be willing to take faith-based organizations seriously? Will religious leaders among Christians, Jews, Muslims, Hindus, Buddhists, and others be able to come together to share common goals for their city and speak with one voice if city leaders give them a seat at the planning table? Time will tell, but I have a strong suspicion that a city’s ability to thrive will largely depend on the community’s ability to say yes to both.