Richmond and the Future of Local Food

Editor's note: In May, Whole Foods announced that it was opening a new a location in Richmond, VA—a pilot city for the Thriving Cities Project. Shortly after this news, Richmond native and pastor Nelson Reveley appeared as a guest blogger on Common Place, analyzing what this development might mean for the citizens of Richmond. Here, director of Shalom Farms, Dominic Barrett offers his own perspective on the matter. 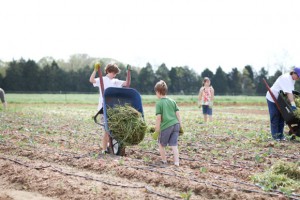 Above: Farmers come in all ages at Shalom Farms.

I should start by noting that personally and professionally I possess a plethora of potential conflicts of interest in exploring what a Whole Foods in urban richmond means for the city, its eaters, and the food system at large. My nonprofit, Shalom Farms has received grants and support from Whole Foods. And as for the enterprises Whole Foods will likely compete with, we receive ongoing support from local grocers Ellwood Thompson and Little House Green Grocer, not to mention that I’m an active member of the yet-to-be opened Richmond Food Co-op.

It's hard to find a true "bad guy" in the natural/organic/local food scene. The question for me is not whether Whole Foods moving in is a good thing. Rather, I am more interested in understanding the scope of the potential impact, what gaps may remain, and what models may be better solutions.

Although I have yet to see full details of the Sauer Center (proposed home of Whole Foods), it seems a fine addition to an evolving part of Richmond’s inner core. It may even, as Nelson suggests, support in a small way the viability of a much-needed Rapid Transit project connecting the city’s East and West Ends. And, as Nelson touches on, another profitable Whole Foods in our region will mean at least a percentage of those profits are likely to end up back in the community—supporting local school gardens and other worthy projects via Whole Foods’ charitable work.

Some have expressed concern over what Whole Foods might mean for the burgeoning local grocery scene. When the doors open on Ricmond’s newest Whole Foods, it will be two miles from Ellwood Thompson's (the biggest guy on the local grocer block), three miles from Little House Green Grocer (a smaller but relatively new and promising local option), and less than one mile from where the Richmond Food Co-op plans to open a full service grocery co-op in the next two years. Without looking at any market data, my gut feeling is that Whole Foods will not pose a threat to these local establishments.

Why not? Because of the 550 and counting members of the opening co-op and the many loyal patrons of Little House and Ellwood Thompson's. In spite of the presence of Whole Foods, many of these shoppers will continue to seek options that will both maximize the local impact of their dollars and increase their access to locally sourced products, supporting local growers and producers.

We find ourselves at a unique moment. Growing acceptance of the challenges of climate change has coincided with the trendiness and “cool factor” of the local food movement. Yet, turning these forces into brick and mortar, topsoil and tractor, can feel slow. In any given season, local vendors may one moment find themselves unable to meet customer demand for an item, yet days later unable to move a local product quickly enough. Similarly, local, sustainable farmers find themselves struggling to find viable business models, unable to scale up to meet potential institutional buyers or to pay the bills adequately by relying on direct-to-consumer sales. But for many growers, and the consumers looking for a local product they can feel good about, Whole Foods is not likely to be a game changer.

With months to go before Whole Foods opens its doors, hundreds of Richmonders have demonstrated a commitment to finding a better way: the Richmond Food Co-op. They have invested $150 each to be a part of a community driven and owned grocery option—a commitment so strong that investments are coming in even before the Co-op location has been finalized. Co-ops work because they can harness economies of scale, resulting in lower prices for consumers, larger margins for the producers, and maximum flexibility for local growers. They also allow members a voice in the decisions of the store.

However, despite the lower mark-ups made possible by a member-owned model, even co-opers like myself admit that it may be only a modest improvement for those Richmonders who lack the means—economic or transportation—to access to the highest quality, sustainably grown local produce. For many, particularly those living in the East End, South Side, and North Side, quality affordable grocery options will continue to be hard to come by. For these folks, a co-op will be a small improvement, and a Whole Foods on West Broad Street will be of little consequence. But here again, a forthcoming local business may fill in the gap.

Jim Scanlon, a 40-year veteran of the grocery business, resigned just last week from his role as Regional Vice President of Martin's Food Marts where he oversaw all of Martin's 34 stores in Virginia. In his new venture, he is pursuing a plan that he has been quietly developing for the better part of a decade. In 2015, he hopes to break ground on Jim’s Local Market in Richmond’s East End, less than a mile from the bulk of Richmond’s public housing units. His store will leverage his expertise and relationships in the grocery industry to provide the same variety, quality, and prices of national chains, something small independents are not typically able to do. Meanwhile, his independent community-focused store will have the freedom to source from small local providers, provide incentives for low-income shoppers, and partner with the local health experts to provide educational programming. Finally, community members will help determine how a percentage of the pre-tax profits are returned to the neighborhood.

For both the Richmond Food Co-op and Jim’s Local Market, it is the local element that provides the most promise and may be what most separates these models from a company like Whole Foods. More than ever we need locally based solutions to transform our communities, and nowhere is this more clear or powerful than with our food.

Dominic Barrett is director of Shalom Farms, an initiative of United Methodist Urban Ministries of Richmond.