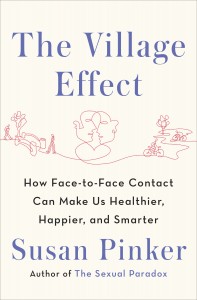 In her new book, The Village Effect: How Face-to-Face Contact Can Make us Healthier, Happier, and Smarter (Spiegel & Grau), psychologist Susan Pinker argues for the power and importance of human interaction. In an age of rapid mobility and digital communications, Pinker uses evidence and stories to remind the reader of the need for socializing and its effects on our physical and mental well-being. Although most people would certainly recognize the importance of relationships, Pinker highlights in our interview the profound implications for nurturing and neglecting our social lives.

Common Place (CP): In your book, you give several reasons for the importance of face-to-face contact. Why then does physical contact matter so much for building personal relationships?

Susan Pinker (SP): In person, interaction sparks a cascade of psychological and biochemical events that foster trust and promote empathy. Although they often pass under our radar, making eye contact and synching one’s body posture and tone of voice to someone you’re talking to face-to-face deepens mutual understanding. For example, job applicants who subconsciously mirror their interviewer’s gestures are often offered higher starting salaries. Athletic teams who are encouraged to pat each other’s backs and give high-fives and fist-bumps tend to score more goals. We are a social species that has evolved for close contact; when we’re in close proximity to others, hormones and neurotransmitters are released that help us solve problems, damp down stress, feel safe, and stave off loneliness. This has the added effect of reducing deleterious effects on our long-term health. Interestingly, research shows that without face-to-face contact, relationships decay. If you haven’t seen someone within the last two to five years, your place in his or her circle has likely been replaced with someone else.

CP: Most people recognize the significance of family and close friends, yet you argue that “weak bonds” can be just as important for individuals and communities. How so?

SP: We know from several excellent, long-term demographic studies (including those by Harvard’s Lisa Berkman and Julianne Holt-Lunstad at Brigham Young University) that having an integrated social life is the best predictor of health and longevity. People with varied social connections—not just individuals with a few close relationships, but those regular interactions with the larger communities in which they live—have a distinct survival advantage. Joining groups that allow you to form those weak bonds helps individuals in two ways. It promotes regular social contact with a diverse group of people, which we know is protective, not only from an immunological point of view, but also cognitively: People who have a large variety of social commitments are less likely to suffer from dementia. In addition, weak bonds provide a source of helpful tidbits of information that strong bonds often don’t. The reason? We often share the same background and types of knowledge with our close friends and family members. People who are more distantly connected to us have access to different banks of information. The social scientist, Mark Granovetter, refers to the advantages that accrue to those with an expansive social circle as “the power of weak bonds.”

And communities are stronger when different types of people feel connected to it— when they feel that they belong and care about what happens to the people in the group beyond their own intimate connections. Without the cohesion of weak bonds, a community would just be an agglomeration of individuals and family units with no common goals, and nothing tying them together. Actually, it wouldn’t be a community at all.

CP: You wrestle at length with the tension between the promise of technology and its limit in our lives. From your research, what are some helpful ways to think about the role of smart devices in our social lives?

SP: Digital devices can’t be beat when it comes to searching for information, classifying it, and storing it. Clearly, smartphones, laptops, and tablets are cheap and convenient communication tools, too. But they can’t compete with the human brain when it comes to expressing and understanding human emotion, both of which are key to establishing empathy and social cohesion. Evidence is also emerging that cognition and emotion are not distinct neurological events, as psychologists used to think; processing human feeling and responding appropriately are faculties that are tightly linked to the ability to learn and perform. As a result, these devices also have limitations during nuanced human exchanges, such as in the context of complex problem-solving or when teaching kids.

So, the key is not to conflate various modes of communication. When it comes to our social lives, our devices are perfectly designed for logistics: for researching and helping people arranging when and where to meet, and even facilitating those meet-ups. There are lots of apps that are designed to help people with similar interests get together, which is an ingenious melding of the technological with the interpersonal. For example, when I found myself in Berlin for a week between two conferences, I found a communal workspace—a “hub”—that allowed me to meet other writers and creators there. Online searches were indispensable for that entry into a new social world.

But there are individual differences in how people use their devices. Personality plays a big role in whether smart devices bring people together or drive them apart. We’ve all seen couples or friends in restaurants who are focused on their screens instead of on each other. The research confirms that people who are not that comfortable or skilled at interacting face-to-face use their devices to create distance, and, more to the point, to replace more intimate interactions. There are data showing that the more time people spend on social media, the less real involvement they have with their own communities, for example. Research by Dutch social scientists shows that shy or learning disabled kids are less likely to use their digital devices to meet up with friends, whereas outgoing kids use their devices to arrange get-togethers. And while online communication has been a huge boon to those on the autistic spectrum, communicating online has not been shown to reduce their loneliness, or to help them build real offline friendships, something that is often a real challenge to people in this “community.” Studies of cancer support groups have unearthed the same information versus emotional support dichotomy. People who participate in online support groups are far more likely to feel lonely and depressed than those in face-to-face support groups. Although I presume both groups foster the sharing of information, only the face-to-face support groups reduce the existential dread and distress caused by the challenges of a chronic disease.

CP: Speaking of technology, there is, for better or for worse, a vocal call for cities to be smarter and more data-centric. What advice would you offer city planners as they think about and design our cities?

SP: Cities that take into account the new data emerging from social neuroscience would focus on creating “third spaces”—the places where people feel comfortable enough to gather, places where small groups of people feel they belong. Right now that role has been assumed by commercial enterprises such as McDonald's and Starbucks, because municipalities have left a vacuum when it comes to creating places where teleworkers, retired people, and young parents with children can meet and socialize. The emphasis that used to be placed on building parks, libraries, gazebos, and other friendly public spaces is now being subsumed by an enthusiasm for all things technological. There’s no going back, but it is worthwhile to deploy our technological prowess in discerning the places where people like to gather, and what their needs will be while they’re there. So while it’s great to have cities with free WiFi everywhere, without a place to sit in couples or in small groups, providing that access simply promotes more individual focus on individual screens. A more clever use of technology in cities would bring retired people together, for example, or allow municipalities to know exactly where their aging single residents live, so that if there’s an environmental disaster such as a heat wave or a flood, teams can contact the isolated. The data-crunching can be done digitally, while the contact can be done in person.

Although I don’t extoll bygone eras as superior, one reason why I gave the book the title The Village Effect is because the way traditional European villages are built necessarily fostered social interaction and a sense of belonging. There are squares in which to gather and locations for communal markets; towns and cities are designed so that people are forced to cross paths on their way between one place and another. Google has adapted that philosophy in designing the Googleplex. Although technology is the raison d’être for the place, the social requirements of the people who work there are not only not neglected, they’re prioritized. That perspective should be the way of the future. Use technology to bring people together, not to drive them apart.

n Pinker is a developmental psychologist, columnist, and broadcaster who writes about social science. Her first book, The Sexual Paradox, was published in seventeen countries and was awarded the William James Book Award by the American Psychological Association. Her work has been featured in The New York Times, The Globe and Mail, The Times of London, the BBC, the CBC, The Economist, Atlantic Monthly, The Financial Times, Der Spiegel, and NBC's Today show. She lives in Montreal.