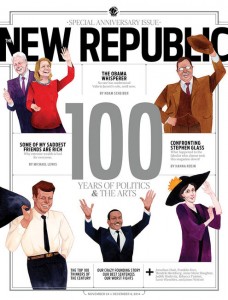 Let me start on a grumpy note: Although I've been responsible for some myself, I'm no fan of magazine anniversaries. Smarmy accounts of past achievements and highlights, the recycling of old hits, the chummy accolades of well-chosen celebrity subscribers. Maybe an obligatory carp or cavil. Tossed together, stirred not shaken, and served up with a black-tie gala event—and there you have it, a gigantic blast of self-congratulation.

Eeyorishness aside, I'm happy to see The New Republic rounding a century. To make it for more than a few years is a feat for any publication these days, and The New Republic has had its share of near-death experiences. But the magazine, in print and online, has arrived at this milestone with at least the appearance of fiscal stability and talk of even bigger things ahead, thanks in no small part to the deep pockets and ambitions of its current owner, Facebook millionaire Chris Hughes. More important, the journal continues to bristle with editorial brilliance and contrariness. Still fundamentally liberal in spirit, though less certain than ever about what liberalism means, the magazine reflects the uncertainty that many Americans feel about the viability of politics, and political ideas, in our fragile democracy.

Much could be said about the The New Republic on this occasion. Let me restrict myself to two concerns. The first is in response to what the New York Times reported on Hughes's vision of the future of the magazine:

Eyebrows were raised last year when Mr. Hughes, a former organizer for Barack Obama, introduced the redesigned magazine with an editor’s letter that omitted the words “liberal” or “liberalism.” These days, while he says he remains committed to print, he is also ready to jettison “magazine.”

“Twenty years ago, no question, it was a political magazine, full stop,” Mr. Hughes said in a joint interview with Mr. Vidra in New York. “Today, I don’t call it a magazine at all. I think we’re a digital media company.”

Mr. Hughes (who gave up the editor in chief title but remains publisher) and Mr. Vidra dismissed speculation that they wanted to take the magazine in a more lowbrow, BuzzFeed-like direction. But they did say there was room to increase the digital audience to as much as “tens of millions” of unique monthly visitors by focusing on a broader range of topics and on new forms of digital storytelling that “travel well” on the web.

A digital media company that jettisons the "magazine"? Excuse me, but this is the kind of crazy cant you hear in all discussions of the crisis of journalism these days. I won't get into a long argument here (though this article gets into it nicely), but I maintain there is no current crisis of journalism. Journalism, the craft of covering and reflecting upon all aspects of our changing world, is doing just fine. But there is a crisis of media companies that are trying to to take over, absorb, and manage journalistic organizations and publications.

The crux of the crisis is this: The hardy captains of these great media combines generally have a poor understanding of, or at least a low regard for, journalism. Yeah, yeah, they say they respect the ethic and hard work of the journalists, but the truth is they find journalistic content a little hard to peddle—at least compared to zippy, frothy gossip about celebrities or deeply human human-interest stories, or lists of my five hundred favorite peanut butter recipes.

If you want a brief primer on the difference between what media companies do and what journalism does, just look at The New Republic. Most of what it publishes in print, and a fair amount of what it publishes online, is substantial journalism; but a great deal of what it fills its website with is fluff. It's not difficult to guess which is harder to produce and which we'd see more of if The New Republic jettisons the magazine.

We're not just talking platforms here, but platforms matter. They variously demonstrate a commitment to varying degrees of quality, excellence, and depth. The New Republic's commitments to the highest standard of journalism are tethered to its magazine. Jettison the magazine, and the brand will decline into, at best, mediocrity.

My other concern is related to the liberalism that owner Hughes feels reluctant to mention. I am hopeful that The New Republic's current and brilliant editor, Frank Foer, will continue to make his own deep interest in the history and debates of American liberalism a central focus of his journal. If liberalism is to find new vigor and direction in this country, while resisting either simplistic leftism or accommodationist neoliberalism, I count on The New Republic to help lead the way.