It was a letter from my life insurance company that got me thinking about the philosopher Alasdair MacIntyre. I had applied for some additional insurance. After providing the company with the  requested medical information, I received a machine-signed letter from an underwriter indicating that she “had hoped to approve the increase” but was “sorry” that she would be “unable to approve this change.” I had had a screening colonoscopy a few years back, you see, and the doctor had found a polyp. I am now, it appears, a risky case.

It wasn’t risk or the coverage denial that got me thinking about MacIntyre. It was a reference to loyalty. In the last paragraph, the underwriter attributed to me “loyalty” as a policy owner and assured me that it was  “important” to the company. 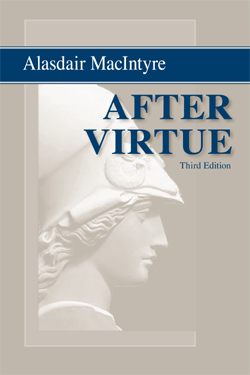 The connection with MacIntyre?  Well, in his famous book, After Virtue, he made the “disquieting suggestion” that our “language of morality” is in a “state of grave disorder.” Although we continue to use virtue terms, these concepts, he argued, have been progressively cut loose from “those contexts” of belief and practice “from which their significance derived.”

Surely something is adrift, I thought, when an appeal to “loyalty” can appear in the same letter whose purpose is to inform me that it’s not in the company’s financial interest to sell me a little more coverage. For whatever else it has meant, loyalty, a virtue term, has normally entailed mutuality and required some setting aside of self-interest for the sake of ensuring the integrity of particular and particularistic relationships with family, friends, and social groups of any kind to which one might belong or identify.

“Loyalty,” as in customer or brand loyalty, is an old idea in business and marketing, dating back to at least the 1940s. It is generally understood to have both positive emotional and behavioral elements. The idea is that consumers become attached to particular companies/brands, form a relationship with them, and seek to preserve the relationship. The notion of “loyalty” is intended to convey more than simply a pattern of repeated purchases, a pattern that may be rooted in factors such as cost or available alternatives having nothing to do with satisfaction or commitment. There is also an attitudinal and affective attachment that keeps the customer coming back regardless of convenience or changes in features or price relative to the competition. Marketers expend a great deal of energy trying to cultivate such “loyalty.”

Of course, a customer might be loyal to specific people in a company. Or to a company because it embodies the values of a larger community with which the customer identifies. But speaking of loyalty to a brand, as such, would seem to strip the word of all of its meaning as a virtue, reducing it to little more than a personal choice or preference unguided by any external criteria. Such a use of “loyalty” is precisely what MacIntyre argued is taking place with respect to all of our moral language. The rhetoric of morality is being transformed into “mere expressive assertion.”

But as MacIntyre also observed, while the virtue term may be used as an expression of preference, it purports to be something more than that, something that in fact appeals to a standard. Substitute a non-virtue term for the virtue term in my insurance letter and you will see his point. In the marketing literature, “loyalty” has a near-synonym: “stickiness.” Companies are seeking “sticky” customers, who exhibit the same dogged commitment as “loyal” ones. Had the underwriter used this term, the relevant sentence would read: “Your stickiness as a … policy owner is important to us.” Assuming I knew what the writer meant by stickiness and so took no offense, I would read no hint of obligation in its letter, no suggestion of a standard independent of the strictly commercial relationship between the company representative and me. While my “stickiness” as a customer may be important to the company, the word makes no implicitly ethical demands on me. There is nothing praiseworthy in being sticky, no betrayal in being un-sticky.  But the word "loyalty" makes a potential decision to change companies into an ethical one and brings my potential disloyalty into view. And, indeed, the letter gave me pause. I do not in fact owe any obligation to this company, and yet I felt the prescriptive force in the virtue language.

If there is no genuine appeal to impersonal criteria, then, MacIntrye argues, using moral language can only be manipulative, an attempt to impose one’s feelings, attitudes, and choices on another. I doubt the underwriter, from her desk in Hartford or Des Moines, had any such deliberate intention. But that is also part of the problem that MacIntrye identifies: We don’t recognize the “grave disorder,” and so continue to use moral language as if all was well.