Christmas and the New Cult of Images 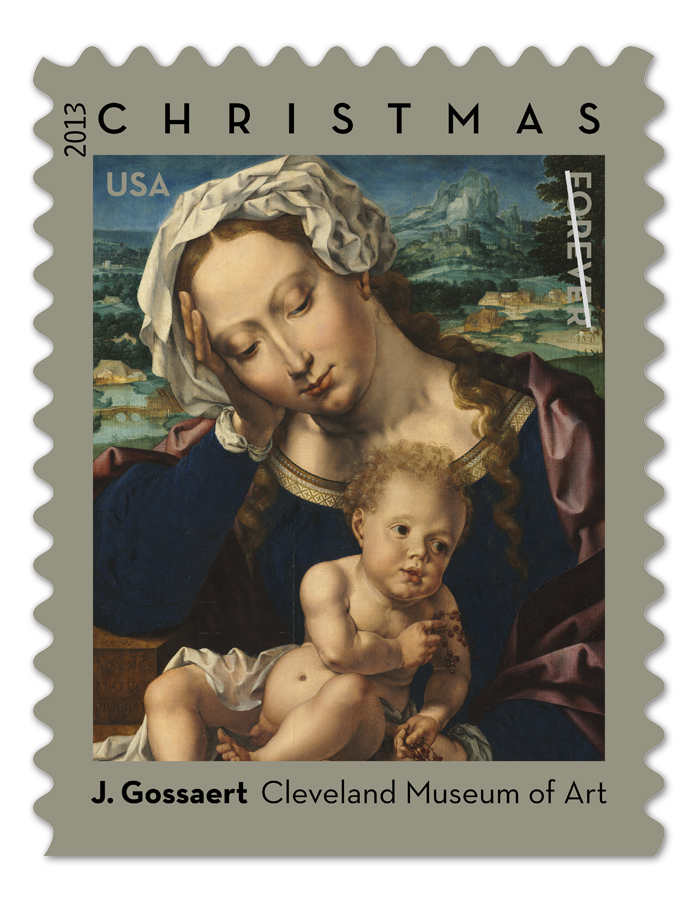 Christmas is a complicated affair. Never mind the dizzying logistics of 15 billion packages, cards, and letters to be delivered by the U.S. Postal Service this season—many going to those who have so much, fewer to those who have little, and most of them destined for landfills or the bottom of the sea—a thought that brings on a sense of aesthetic fatigue at the environmental consequences of the gift-giving economy, not to mention its deeper ethical quandaries. The simple question of what stamp to choose has also become increasingly complex.

As I was recently and publicly reminded by a postal clerk, with a knowing wink to the other customers waiting in line, it’s no longer acceptable to ask for Christmas stamps. “Holiday” is the preferred term.

Two of this year’s seasonal stamps, though modest in size, reveal much about why images—what we choose to represent by them and the meanings they might unfold—continue to matter in a culture thoroughly saturated by them. 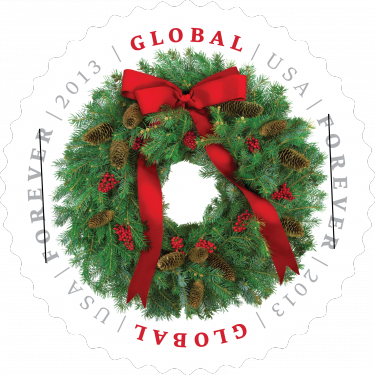 Consider the differences between Jan Gossaert's richly rendered, jewel-like Virgin and Child of 1531 and the "Global Wreath," the first global holiday stamp, newly commissioned for 2013:

The wreath that graces the stamp art—created especially for the project—has a base made of a wire metal frame folded around Styrofoam, which was spray-painted green. The designer attached evergreen twigs onto picks—small sticks with one sharpened end—and then inserted them into the base, rotating the picks to make the wreath full and lush, a process that took more than eight hours.

I understand, and have some sympathy for, the logic behind the Global Wreath, which is more than a celebration of Styrofoam-and-toothpick craft. As wars of religion continue to rage, with images increasingly at the center, benign symbols like the Global Wreath, nearly emptied of historic or religious content, are carefully constructed to avoid such tensions.

But I chose the Gossaert. The choice was made not without a certain feeling of embarrassment and the need to justify my apparent lack of global spirit, both to the clerk and the suddenly attentive audience awaiting my decision.

"I'm an art historian,” I said, attempting to use my profession as a buffer. "I simply want the most beautiful image, a real work of art.”

Yes, the Gossaert is a real work of art: the deeply saturated colors, subtle volumes and nearly palpable surfaces of its figures and cloth rendered through a masterful application of innumerable layers of paint. It’s an image that overtly performs and announces a dedication to the achievement of the highest principles of painting by an individual artist, in contrast to the anonymous, Styrofoam project that constitutes the Global Wreath.

There's also a rich symbolism to the painting, an iconography of allusive meanings that slowly unfolds for the viewer who makes the effort to understand the theological significance of the Virgin’s somber, contemplative look, the darkening mood of the sky, the artful exposure of the Child's genitalia or the cluster of berries he holds in his hands.

But what makes Gossaert’s painting of 1531 deeply moving, and worthy of further reflection, is its fragile synthesis of the humanistic ideals of Renaissance painting and the image as a site of devotional contemplation, a synthesis that was to be shattered by the wars of religion in the Reformation that reshaped the religious and political landscape of modern Europe.

As Reformation scholar James Simpson reminds us, the violent iconoclasm of the sixteenth century, and the resultant shift of contested, religious images into the neutral space of art and museum, had greater consequences than the stripping of Protestant churches and the division of faiths. Our hard-won modernity -- the Enlightenment legacy of rational inquiry, freed from the superstitious grip of idolatry--is integrally bound up with the destruction of images.

Yet despite the best efforts of the Reformation and Enlightenment to abolish the idols of images and of the mind, they have returned with renewed force in contemporary culture, reconstituted in powerfully seductive, proliferating forms that are increasingly hard to resist.

From iPads to iPhones, image-rendering screens are an indispensable part of modern life, reconfiguring individual and social behavior in complex ways we are only beginning to grasp, rebooting traditional conceptions of what it means to be human in a post-human world. Given the timely introduction of the iPad mini for the holidays, with expected sales upwards of tens of millions, Christmas day around the globe promises to be a virtual affair, as a new generation of iconophiles pay homage to these artful and miraculous machines.

Should we be worried that the iconic image of the holidays is no longer one of communal gathering around a hearth or table but a scene more reminiscent of Plato’s cave, where individuals are held captive by an illusory succession of flickering images—newly instantiated in even more illusionistic and captivating digital form?

Among modernity’s unintended effects—one that isn’t captured by historian Brad Gregory’s capacious, and controversial, critique—is the ascendancy of a new cult of images:  endlessly distracting technological images that cultivate consumerism rather than contemplation and, more alarming, at times supplant our connections to the real persons, places and the world around us with virtual ones.

Fortunately, we need not be philosopher-kings to occasionally find our way out of our technological confinement. Nor do we need to resort to the wholesale iconoclasm of our intellectual ancestors, though there is nothing so refreshing as occasionally closing the browser, stepping outside into the bright light of day, and noting the suddenly enhanced contrast between the sensuously replete, fully dimensional, physical world, and the digital world of the internet.

We share a life with images. There is an intimate relation between the images that form the basis of perception and the internal images of the imagination, a relation that profoundly shapes the most fundamental aspects of our being as knowing, feeling, and thinking persons. For philosopher Alva Noë, pictures, and how they bring aspects of reality into presence, are crucial to understanding perception in general. The world opens up to us in relation to what we we able to bring into view.

Picturing things, taking a view, is what makes us human; art is making sense and giving shape to that sense, the German painter Gerhard Richter once wrote. To the degree that we attempt to understand a work of art, it holds the potential to transform how and what we are able to see, enabling us to see more and further, and to become more intelligent in the process. As Kryzstof Ziarek argues in "The End of Art As Its Future" (The Hedgehog Review, Summer 2004), art, in its transformative, poetic possibilities, also enables us see the limits of technology as the dominant  interface with the world.

It may be a virtue of our newly complex, technological condition that the continuing value of the old cult of images, whether of art or literature, is brought into clearer view, precisely at the moment when it would seem to have been lost.

Anna Marazuela Kim is an Associate Fellow at the Institute for Advanced Studies in Culture at the University of Virginia and a member of The Iconoclasms Network, an international team of scholars and curators whose research contributed to the exhibition Art Under Attack: Histories of British Iconoclasm at Tate Britain in London.