Recently at Target, I noticed a pool float aimed at swimmers who (responsibly, of course) enjoy an adult beverage while relaxing in the water. In English and in French, the copy on the box informed the purchaser that the float would give her the kind of leisure she is looking for—“you deserve it, vous le méritez.” Is that enough to make a sale? Apparently it is, because later I saw someone behind me in the checkout line holding that very product—and looking, I might add, quite deserving. 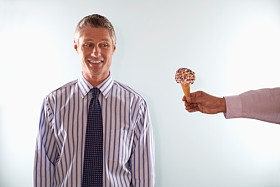 Just what do you deserve? Quite a lot according to today’s marketers and ad copywriters. From healthcare to fast food, you deserve choices, you deserve the best, and—most hyperbolically—you deserve it all. Advertising has long played on the emotions to convince buyers of a product’s merits. McDonald’s most famously assured the hungry that they deserved a break today, while Buick’s short-lived Reatta model dared car shoppers with the tagline, “Go ahead, you deserve it.” Sharing a meal gives us feelings of well-being, belonging, and mutual affection. (Recently, THR guest blogger Stephen Assink wrote about an inventor whose food product aims to do just the opposite; see “Minimalist Food for a Streamlined Life.”) Driving that certain kind of automobile gives you a feeling of superiority, inviolability, or uniqueness.

What's interesting to note here is how the term deserve leads to two separate conclusions: In the case of eating together, we engage in a merited sense of belonging and love, but in the case of a certain kind of car (or handbag, smartphone, computer), the result is a kind of exalted uniqueness, a sense of being above it all. If there is any belonging in the latter case, it is only at a distance among other coolly discerning consumers.

Deserve, then, appears to be a word of many parts. The rapper Future hears from his cousin who tells him, “You Deserve It,” and a hit is born. In the TV series You Deserve It, contestants compete to win prizes for others more deserving. Paid your dues? You deserve a break. Worked hard all week? You deserve a weekend. The word also ranks high among sloganeers, including the ones who first spun out the unnecessarily cryptic “sometimes you have to forget what you want to remember what you deserve,” the rather disturbing “you deserve to be loved until your insides melt,” and the admirably succinct “be happy, you deserve it.”

The Oxford English Dictionary notes that deserve derives, via Middle English and Anglo-French, from the Latin root deservire, to devote oneself to, to serve zealously. Surely, few would dispute that our troops deserve our support or that children deserve a chance for a good education. But when did acknowledgement of merited support or reward—just deserts—become a self-congratulatory pat on the back? In our modern therapeutic culture, to deserve has joined the pantheon of sentiments designed to uplift, to affirm, and to bolster self-esteem. Going after what you deserve is about following your dreams, fulfilling your potential, and then sitting back and smugly surveying all the good things coming your way because, well, you deserve them.

If we chip away at the sugary carapace of deserve as it is now used, we see that its core meaning is something much more insidious. By gauging our self-worth on the ministrations of marketers and focus groups, we have become complicit in the skepticism that drives consumerism.

It is also worth noting that deserve in modern parlance gains much of its potency from the idea of ego-driven entitlement.  Entitlement is another multivalent word, but the triumph of its cheapened sense is undeniable. For Americans, entitlement came from our Founding Fathers. They assured us that we are entitled to certain rights, that they are unalienable. While “life, liberty, and the pursuit of happiness” imply much about individual freedom, they leave the vagaries of human nature tantalizingly open to interpretation. Into the breach have stepped many voices to assure us of what we deserve, perennial yes men to the ego’s insistence on its own merits.