According to a Pew Research Center survey, 55% of Millennials have posted a selfie on a social media site, compared with 24 percent of Gen Xers; 9 percent of Boomers; and 4 percent of the Silent Generation.

Generational snapshots sometimes confound us in the ways actual photographs do. The players in a team photo taken right after losing to their perennial cross-town rival are inexplicably smiling. Why? Well, it turns out they barely lost to a team from whom they'd expected a thorough trouncing.

A similar mystery arises from the recent survey of the Millennial generation, the cohort of young American adults who today range in age from 18 to 33. According to the Pew Research Center's report, "Millennials in Adulthood," these Millennials are relatively detached from religious and political institutions, are dealing with greater economic challenges (high levels of student debt, unemployment, and stagnant wages), are less inclined to rush into marriage, and are more prone to distrust other people than were the young adults of the three preceding generations. 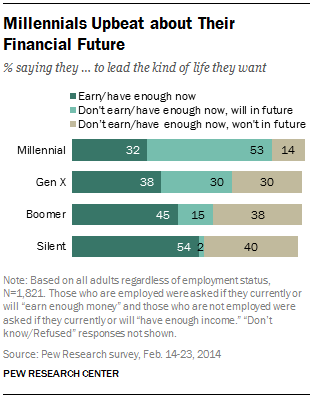 et for all those indicators suggesting a fundamental wariness toward the world, the Millennials are curiously optimistic about their future, more so than the members of the three previous generations of Americans, the Baby Boom, Generation  X, and the Silent Generation.

Pew doesn't offer explanations for this seeming disconnect, though it does conjecture that the racial diversity of the Millennials—the most racially diverse generation in American history, thanks largely to the influx of Asian and Hispanic immigrants--has something to do with their lack of social trust.  ("A 2007 Pew Research Center analysis found that minorities and low-income adults had lower levels of social trust than other groups," the report notes.)

Pew also speculatates that the social and political turbulence of the 1960s and 1970s made the Boomers as young adults more pessimistic about the future than today's Millennials are. If so, it's interesting to note that economic insecurity may be less troubling to young adults than those other kinds of instability.

Two possible answers: first, the very factor possibly contributing to low levels of social trust—namely, the fact that many of the Millennials are immigrants, or the sons and daughters of immigrants—may account for their resilient optimism. To these young Americans, the future still looks brighter than it did in the countries they or their parents came from. They cling to the American Dream more easily than do those Americans who have seen the dream gradually lose its promise.

The other possibility: young Americans are optimistic because they derive support and solace not from traditional institutions like churches and neighborhoods but from the virtual worlds they frequent and even at times seem to inhabit. ("They have taken the lead," Pew notes, "in seizing on the new platforms of the digital era—the internet, mobile technology, social media—to construct personalized networks of friends, colleagues and affinity groups.  They are 'digital natives'—the only generation for which these new technologies are not something they’ve had to adapt to. Not surprisingly, they are the most avid users.") While digital communities may be "weak," in terms of levels of commitment and affiliation, they represent worlds of seemingly limitless possibility, including the entrepreneurial possibilities associated with the new, and particularly social, media.

Can such optimism endure?  Only the next generational snapshot will tell.