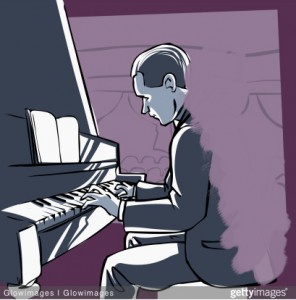 Author and photo-historian David King has become something of a cottage industry, publishing books that draw on his massive collection of Soviet-era photographs, posters, and ephemera. In his 1997 book The Commissar Vanishes: The Falsification of Photographs and Art in Stalin’s Russia, King examined the commonplace practice of rewriting history by removing from official photographs inconvenient apparatchiks who had outlived their usefulness. It was a crude method, but effective. By airbrushing, clipping, or cropping out obsolete Bolsheviks—Trotsky, for example, was completely removed from the photographic archives—the dictator was able to revise history, direct public perceptions, and control people’s memories to an astonishing degree.

The urge to rewrite history has by no means been confined to the past. Croatian pianist Dejan Lazić would also like to airbrush the past, but this time his own. We generally think of artists as living to express themselves and to leave indelible records of their existence—but Lazić would apparently prefer to be forgotten.

Or forgotten in part: In 2010 Lazić played a recital at the Kennedy Center that was reviewed by Anne Midgette of the Washington Post. The review, while unflattering, was hardly career-ending. Lazić’s primary offense seems to have been that he allowed ego rather than musicianship to take center stage. The pianist would probably have moved on if Google's implacable algorithms didn’t keep this review in the top five search results for his name.

In September, Lazić requested that the Washington Post remove the review from its website, citing May’s European Union “Right to Be Forgotten” ruling. After letters to the editor and an October interview with the Post, Lazić remained unsatisfied. This month, Lazić posted on his website a long explanation of his behavior, insisting that his case has nothing to do with sour grapes over a bad review, but rather with a “web data hierarchy run by some major corporations that needs to be questioned and investigated.” He went on to say that he would rather not contact said “hierarchy” (Google EU) himself and ask that the review be expunged because he believes in free speech. What Lazić really wants Google to do is remove the review by itself.

Lazić’s case suggests what might be called the ethics of editing. Editing oneself is preferable—even imperative—if we are to make it through the day. If Lazić had chosen to ignore Midgette’s review, his carefully tended public persona as a composer, pianist, and arranger would have filled in the gap left by the critic’s momentary assessment. Instead, Lazić has taken the position of trying to edit the Internet editors, those many gatekeepers, curators, and mediators of the media who keep the digital current flowing. By citing the "Right to Be Forgotten” ruling, he has called on a notoriously elusive and difficult-to-enforce law that aims to determine exactly how Internet information is, in the EU Court's wording, “inaccurate, inadequate, irrelevant, excessive.” Does Lazić really want to relegate himself to the status of “data subject” and be ruled by a law that gives him the right to be forgotten? It’s difficult to imagine an outcome less in keeping with the artistic spirit.

Lazić’s quest is essentially quixotic. As Chad Wellmon has pointed out on The Infernal Machine, algorithms don’t communicate. They compute. It is true that some Internet outlets have brought on human beings to edit the algorithms in an attempt to corral millions of data points by means of norms, practices, and expertise (and Lazić would probably like to meet those particular apparatchiks). If Lazić succeeds in persuading the Washington Post to remove the review or if a brace of EU attorneys do so, the result is uncomfortably close to that achieved by Stalin and his team of photo doctors. Surely, it would be preferable to be remembered for playing in a past recital, no matter how questionably, than to be utterly eliminated from memory banks of potential concert promoters?

Lazic’s willing embrace of the right to be forgotten is, in other words, a voluntarily abdication of the right to self-determination. The EU Court specifies that its ruling focuses on data protection and that the “right to be forgotten” is not absolute; it does not trump fundamental rights such as freedom of expression or freedom of the media. The Court further asserts that the right to have one’s data erased is not unlimited and must be considered on a case-by-case basis. All of this jurisprudential circumspection may sound comforting, but our modern-day airbrushing of history is all the more worrisome because, in our digital age, we may all become complicit in our own obsolescence.