Many years ago, a friend of mine was asked what she planned to do with her English degree after she graduated from university. Her reply was terse but only partly ironic: "I plan to read novels." I continue to find hers the best of all possible replies to that dreaded question, and not only because I know this person went on to have a successful life that included the practice of law, a happy marriage, many friends, and much richly rewarding reading. It would be going too far to say that her success and happiness resulted from her long engagement with good novels and other works of literature and thought. After all, we've all known avid readers of literature whose lives have played out disastrously, sometimes in seeming imitation of a tragic fictional plot or character. But in this friend's case, a sense and sensibility sharpened by steady attention to demanding books gave added richness to her life, even what I would be tempted to call added meaning. Who she was, who she became, and who she still is all strike me as the strongest justification of a lifelong engagement with what we capaciously call the humanities.

All that is prelude to a subject broached in one of my past THR blogs on the declining status of the humanities in the academy. There I discussed what I and others see as failure on the part of most humanists to make a compelling case for what they do. I stand corrected. Several outstanding humanists (mainly scholars of literature)  contributing to the winter 2014 issue of Daedalus have done just that.  And they have done so in the most compelling of ways.  Following 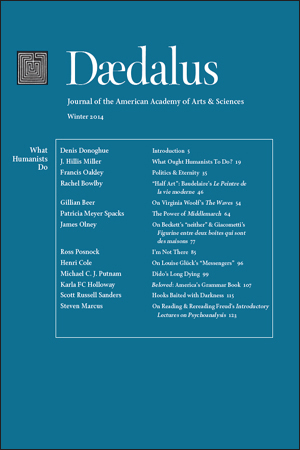 the directions of guest editor Denis Donoghue, a redoubtably shrewd specialist on Irish, British, and American literature, each contributor to "What Humanists Do" was asked to pick and discuss a text that has meant much to him or her. (Donoghue, exercising editorial prerogative, examines the texts of several formidable humanist-critics, including F. R. Leavis, Northrop Frye, and Jacques Derrida, but gives most attention to T. S. Eliot and one of his typically astringent critical judgments on how literature, in a very indirect way, gives us knowledge of life.)

J. Hillis Miller, now emeritus professor at the University of California, Irvine, begins his contribution with a few wry comments on Donoghue's assignment.  First, he notes,

Such an issue of Daedalus would not be needed if the social utility of what humanists do were not the subject of widespread doubt. That utility used to be taken for granted. It is hardly necessary to rehearse the evidence for this doubt.

Rehearsing some of that evidence, Miller proceeds to describe the depressing reality of what too many humanists actually do these days. To begin with, many who find any employment at all end up as adjuncts, "typically teaching three or four composition courses a semester, often at several different colleges, for a poverty wage and often no benefits." But even those lucky few who land on tenure track quickly find they have precious little time to devote to the careful reading and teaching of texts:

From graduate school until achieving status as a senior professor, literary scholars, like those in most academic fields, spend a great deal of time these days sending and answering email messages; serving on time-consuming departmental and university- or college-wide committees; writing seemingly innumerable letters of recommendation; serving as a departmental or program administrator,,,,

And on and on the list of duties and distractions goes, making it fully clear why Miller framed the title of his essay as a question, "What Ought Humanists To Do?" He then gets down to the business at hand, using a close reading of two poems, one by Tennyson and one by Yeats, to discuss the vexedly hard business of making sense out of figurative language. And the instrinsic worth of such an exercise? Well, if literature is figuration at a high level, and if all language is largely (if not entirely) figurative, then, Miller believes, those who "learn about the real world by reading literature" are well armed against the dangers of "taking figures of speech literally."

That, in a way, is what many of the better essays in this volume illustrate: that dedication to a deep attentiveness to works of humanistic excellence profoundly alters us in relation to ourselves and to others.  It does so, among other ways, by challenging  the smugness of our natural egoism.  Here is Patricia Meyer Spacks, a professor emerita at the University of Virginia, on George Eliot's masterpiece, Middlemarch:

We rise, ideally, from moral stupidity to moral clarity, Middlemarch tells us. Moral learning consists in the perception and development of relationships and the experience of their obligations. The study of literature, which renders relationship in all its multitudinous and complicated aspects, contributes to such learning—not by providing precepts; often by making problems of responsibility more perplexing than ever....

Scott Russell Sanders' lapidary essay on his 50-year-long relationship with Henry David Thoreau's Walden shows not only how we read a great book but also how it reads us, pushing us to look unflinchingly at our ideals, our ambitions, our achievements, and our shortcomings.

Besieged as we are by advertisements and the cult of consumerism, racing to keep up with our gadgets, rushing from one sensation to the next, we need more than ever to ask the questions posed in Walden: What is life for? What are the necessities of a good life? How much is enough? Do we own our devices or do they own us? What is our place in nature? How do we balance individual freedom with social responsibility? How should we spend our days? Whether or not Walden speaks to your condition, I tell my students, there are other books that will do so, giving voice to what you have felt but have not been able to say, asking your deepest questions, stirring you to more intense life.

Is this vision of a transformative engagement with great works of literature, art, or thought sufficient justification of a humanistic education? Is it the best justification? I wonder how many leaders of institutions of higher learning would be willing and able to affirm that it is both.