How do people around the world see America?

In different ways,  of course, depending on a host of factors. These include levels of economic and social development, religion, politics, manners, and mores.

Whatever they think about America, though, most people today get their image of the United States, including its values, from America's popular culture exports. Some would argue that this composite picture, emerging largely from American films, TV shows, and music, is a funhouse mirror reflection of American reality, a picture that may attract some people in some parts of the world but that is just as likely to trouble and offend many others in other parts. 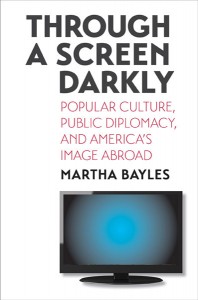 America did not always think that its image should be entrusted solely to its popular culture machine. For a time, and quite successfully, it devoted considerable resources to advancing its values and principles through the institutions and practices of public diplomacy, including the United State Information Agency, assorted USIA- and State Department-sponsored cultural programs, student exchanges, and American libraries.

But at the end of the Cold War, America's pursuit of public diplomacy fell victim to the collapse of a fragile domestic consensus that transcended partisan and even deeper cultural divides within American society. The culture war that emerged with clarity and force then greatly complicated and arguably destroyed our faith in government-supported and government-directed efforts to win hearts and minds.

That, at least, is part of the story that critic and author Martha Bayles tells in her new and valuable book, Through a Screen Darkly: Popular Culture, Public Diplomacy, and America's Image Abroad, just published by Yale University Press. Bayles's book is already sparking discussion, and for good reason. Here is part of an admiring review that appeared in The Weekly Standard:

Bayles understands that the golden age of American public diplomacy is over. The Cold War audience yearned to be free; our mission was to ensure that they were well-informed and to urge them to be hopeful yet patient. Today’s audience has far more in common with its rulers than did the peoples of the Warsaw Pact, who were subject to an alien Communist regime. And today’s regimes can reassert their authority by mobilizing against a common threat to ruler and ruled: a godless, rootless America. Our gospel of freedom and individual possibility has little purchase in places where familiarity with our popular culture demonstrates that the outcome of our gospel is loathsome.

Bayles’s genius here is not just in dissecting the pathology of the pop-culture mind, but in revealing its effects on the world at large—in matters of war, peace, freedom, and human relations. She is also open to the idea that the entertainment industry’s distortions and libels have a degree of truth to them. And that’s the bad news: America’s image, as distorted in Hollywood’s mirror, may be telling us something unlovely about ourselves.

A segment adapted from that book appears in the new spring issue of The Hedgehog Review, and Bayles herself addressed some of her book's points at the Institute for Advanced Studies in Culture on March 5.