B.D. McClay, a contributing editor of THR, is an essayist and critic. 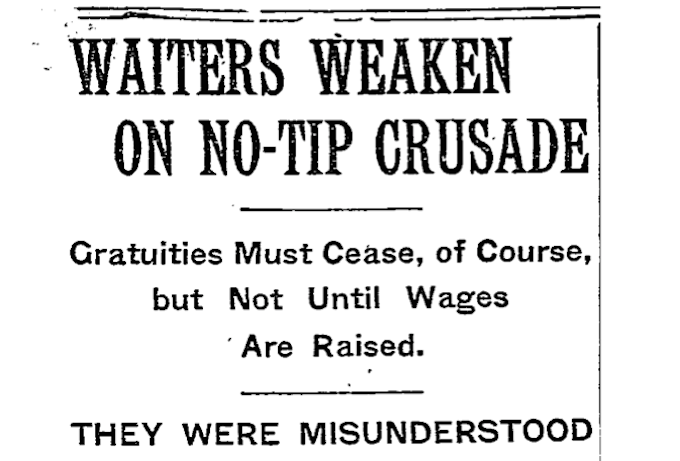 Leon Trotsky refused to tip, or so the story goes. In 1917, when he lived for ten weeks in the Bronx, he would lunch in Jewish émigré cafés. There, he not only declined to tip, but would also instruct the other customers to follow his example. Neither of these actions endeared him to the waiters, who would spill soup on him in revenge. Trotsky remained unmoved. Eventually, the waiters refused to serve him—which, it turns out, was Trotsky's goal. Tipping, he believed, subsidized unfair labor practices. If the waiters were being paid enough, tipping would be unnecessary. Until then, they should refuse to do their jobs.

Today, many Americans are guiltily aware that their waiter or waitress makes less than the minimum wage and accordingly adjust their tipping habits upward. (The habit is so ingrained at this point that even in Seattle, where there is no “tipped wage” and the minimum wage is being raised to $15 per hour, people continue to tip.) Although they’d be ill-advised to follow Trotsky’s example, their generosity may not be as helpful as they would like to imagine. Readers of Sarah Maslin Nir’s New York Times exposé of nail salons—where workers are often paid, under the table, as little as $10 per week (and sometimes nothing at all)—might assume that the solution is to tip more. But Nir believes that this is no solution at all:

What about simply tipping more? This is also a fraught question. Manicurists, of course, depend upon tips, but they say their gratuities are frequently skimmed, or particularly if they are put on a credit card, never delivered. The impulse to make up the deficit in a worker’s pay with more in tips may be a noble one, according to advocates, but does little to solve the root problem, and in fact may perpetuate it. Owners often believe that the tips workers receive mean they do not have to pay as much in wages.

Tipping occupies a curious cultural position. It has been unpopular and controversial for almost as long as it has been around, but being a good tipper has become almost synonymous with being a good person. Its unpopularity, in fact, only seems to reinforce its virtuousness. And few ordinary subjects of conversation are as immediately explosive. Definitions of “standard” tipping vary so wildly—as do philosophies of tipping—that even people who tip the same amount can end a conversation disgusted with each other.

Tipping, as an experience shared by most people, is also a regular subject of semi-personal essays. The philosopher Julian Baggini, for instance, praised the practice at Aeon this March, claiming that “the tip, as a purely voluntary gesture, is a sign that the evening has been more than just a commercial transaction.” These essays are almost always written from the perspective of the tipper, as the recipient of the tip has, one assumes, little to complain about.

Our relationship with tipping, in other words, is not quite so simple or so charming as it might appear; nor is it clear who benefits most from it.  Trotsky’s refusal to tip might have been wrong-headed, but he wasn’t wrong. Through the early decades of the twentieth century, in fact, the abolition of tipping was a cause taken up by organizations like the International Hotel Workers' Union. Individual anti-tip crusaders advocated handing out little cards, in lieu of a tip, that would instruct the waiter to agitate for higher wages.

In their opposition to tipping—though not in their reasoning—these reformers were joined by social critics and journalists like William R. Scott, whose 1916 book, The Itching Palm, called tipping “democracy’s deadly foe” and compared the receivers of tips to the Barbary pirates. In a similar but earlier piece for The New York Times, “Tips Versus Social Equality and Self-Respect,” the journalist Elizabeth Banks described throwing a tip onto the ground in disgust. “I, good American as I consider myself,” she wrote, “do look down upon certain persons as my inferiors, and those persons are the ones who accept tips from me.”

Even as Banks and Scott were arguing that the acceptance of a tip displayed a contemptible servility, waiters and waitresses were rumored to be gaming the system and getting rich under the table. In 1920, a waitress named Sophie claimed to have purchased a $4,500 car by supplementing her $12 per week salary with $80 or $90 tips per week. This was probably not true: Cultural historian Kerry Segrave, in his book Tipping, points out that Sophie was claiming to earn three times as much per year as some of the most highly paid professions in the country. However, the story was uncritically taken up in an editorial in The Nation:

Tipping is a comparatively recent institution in the United States, and grew out of the desire of some persons to establish a servant class—non-existent in our earlier and more democratic days. When Americans want anything, it is traditional that they are willing to pay for it. They have had to pay high for a servant class, and the outlook is that they will have to pay still higher. That, indeed, is the most hopeful aspect of the situation. We have achieved a servant class, but it is rapidly becoming, also, our ruling class.

That final quip aside—the service sector of the work force is in no danger of becoming, now or ever, the “ruling class”—The Nation’s editorial does articulate the odd mixture of guilt and contempt that makes tipping a practice that has become difficult, if not impossible, to destroy, even as patrons claim to hate leaving tips and labor movements claim to wish to stop needing them. Tipping expresses a discomfort with receiving service, and, in addition, it expresses a desire to re-imagine it as something else.

When Baggini, for instance, claims that a meal is more than "just a commercial transaction," he is claiming that he and his waiter share a kind of friendship. But a friendship that's paid for is a friendship both parties know to be false. And when you pay for a server's friendship, your expectations of what a server can provide can become grotesquely inflated. (A personal anecdote: When I worked at a coffee shop, a man once tipped me less because I had no opinion on the pop star Rihanna.)

A tip reflects, not competence necessarily, but, often, how quickly your servers laugh at your jokes, whether you find them attractive, and sometimes simply whether you feel sorry for them. Most of all, tipping discourages people who work in tipped jobs from focusing on their own professional standards, since the customer ultimately sets their wages and can shift the standards at any time for any reason. (In fact, incompetent service from an attractive server is sometimes better rewarded than competent service.)

On the individual level, tipping can be and often is motivated by many admirable instincts. In each individual instance, in fact, it can present itself as a quick fix to the under-compensated labor of your waiter or manicurist. But on the larger level, tipping is corrosive—not to the tip-receiver, as Banks or Scott would have it, but to the dispenser of the tip.

To return, for a moment, to Trotsky: He eventually worked out a compromise with one of the waiters at his émigré café. The waiter would serve him as long as Trotsky ate and left as quickly as possible. Trotsky—true to form—provided no other thanks but keeping up his end of the bargain. Well, Trotsky should have tipped. But if modern-day diners end the tipped wage, they should also be willing to end the tip. And if they can't let go, they should question whether their generosity is really as pure as it seems.

B.D. McClay is the associate editor of The Hedgehog Review. This blog post is greatly indebted to Kerry Segrave's book, Tipping: An American Social History of Gratuities.