Work in the Precarious Economy: Introducing the Spring Issue

One instance of the flexible office space is the hotel desk used by employees at Facebook’s Menlo Park campus; David Paul Morris/Bloomberg/Getty Images.

The importance of work to Americans is hard to overstate. More than half say they derive their sense of identity from their jobs, and that percentage jumps to two-thirds among those who have annual household incomes of $50,000 or more.

Work’s importance to the American pursuit of happiness is just one reason we might be concerned about tectonic shifts occurring in today’s workplace, including ones that are putting the very notion of workplace in question.  By some scholarly estimates, roughly one-fifth of today’s global workforce belongs to the “precariat,” a vast, growing, and class-transcending assortment of part-time, short-term, contract, migrant, or undocumented workers, managers, and professionals who often toil alone at home, take on various gigs, or start new businesses with little or no hope of longevity, steady incomes, or benefits.

What are some of the forces that gave rise to the precarious economy? What is the meaning and reality of vocation under these new conditions? How are people and communities responding to the challenges with new networks and institutions? In short, what are the multiple cultural transformations accompanying a major economic transformation? These questions and more are asked by the essays in our spring issue, Work in the Precarious Economy.

As always, we’ve put a mix of thematic and stand-alone pieces up in full for you to sample: 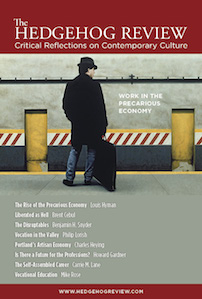 For subscribers, we have contributions from Benjamin H. Snyder, Charles Heying, Howard Gardner, and Mike Rose. In addition, we have an essay from Steven G. Kellman, along with reviews of new books by Samuel Moyn, Francis O’Gorman, Michael Crow, and Mario Vargas Llosa. If you aren’t a subscriber, it’s an easy problem to fix: click here and subscribe today.