79 Theses on Technology. For Disputation.

Alan Jacobs has written seventy-nine theses on technology for disputation. A disputation is an old technology, a formal technique of debate and argument that took shape in medieval universities in Paris, Bologna, and Oxford in the twelfth and thirteenth centuries. In its most general form, a disputation consisted of a thesis, a counter-thesis, and a string of arguments, usually buttressed by citations of Aristotle, Augustine, or the Bible.

But disputations were not just formal arguments. They were public performances that trained university students in how to seek and argue for the truth. They made demands on students and masters alike. Truth was hard won; it was to be found in multiple, sometimes conflicting traditions; it required one to give and recognize arguments; and, perhaps above all, it demanded an epistemic humility, an acknowledgment that truth was something sought, not something produced.

It is, then, in this spirit that Jacobs offers, tongue firmly in cheek, his seventy-nine theses on technology and what it means to inhabit a world formed by it. They are pithy, witty, ponderous, and full of 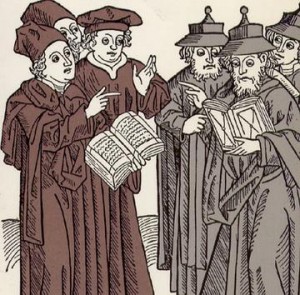 life. And over the following weeks, we at the Infernal Machine will take Jacobs' theses at his provocative best and dispute them. We'll take three or four at a time and offer our own counter-theses in a spirit of generosity.

So here they are: