79 Theses on Technology: On Attention

"Everything," claims Alan Jacobs in 79 Theses on Technology, "begins with attention." Throughout his theses, Jacobs describes attention as a resource to be managed. We "pay," "refuse," and "invest" attention. Behind these distributive acts is a purposeful, willful agent. I can choose whether to "give" attention to writing this post or "withhold" it from my eleven-year-old son (who wants me to explain what the Turing test is). The idea that I can allocate attention as I could any other resource or good suggests that attention is fungible. I've got a limited store of attention, and I have to decide when and where to expend it. It's as though I wake up every day with 100 units of attention. And it's up to me manage them well.

If attention is a good that I can spend well or badly, then it is under my control. I could, on such an account, also lose my attention, in the same way that I lose my keys. And this distributive notion of attention seems to underpin many of our contemporary anxieties about our current moment of digital distraction. The constant notifications from Twitter, Facebook, and my iPhone are all greedy consumers of my attention. If I were just focused, I could assert my powers of distribution and maintain control of my limited units of attention. I would be able to decide exactly which among the myriad objects clamoring for my attention deserves it.

Underpinning Jacobs' distributive model of attention is an assumption that some general mental faculty, a particular power of the mind, exists that can manage this precious resource. The power of attention—just like other traditional faculties such as reason, memory, imagination, or will—is a latent capacity that needs to be disciplined in order to become fully actual and susceptible to manipulation. It's like a muscle that needs to be exercised. And if I engage in the right kinds of exercises—maybe if I read really long novels in one sitting or dismantle the WiFi on my laptop—then I can become the master of my own mind. I can be free and in control of who and what can enjoy the benefits of my limited attention. For Jacobs, then, attention is attention, regardless of the object I'm "investing" it in. And my task is to cultivate better habits of managing and controlling my attention.

Jacobs' suggestion that attention is a mental power that we distribute here or there or anywhere makes sense in certain circumstances. When I engage in discrete tasks, I can think of attention as a limited good that requires tight control and manipulation. If I try to follow my Twitter feed, read a book, and write an article, then I won't do any of those things well. If I refuse attention to Twitter and the book, however, I may well be able to finish a paragraph.

But this image of a sovereign self governing an internal economy of attention is a poor description of other experiences of the world and ourselves. In addition, it levies an impossible burden of self mastery. A distributive model of attention cuts us off, as Matt Crawford puts it, from the world "beyond [our] head." It suggests that anything other than my own mind that lays claim to my attention impinges upon my own powers to willfully distribute that attention. My son's repeated questions about the Turing test are a distraction, but it might also be an unexpected opportunity to engage the world beyond my own head.

If we conceive of attention as simply the activity of a willful agent managing her units of attention, we foreclose the 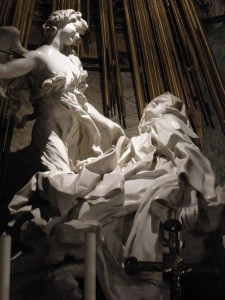 possibility of being arrested or brought to attention by something fully outside ourselves. We foreclose, for example,

Consider, for example, Bernini's sculptural ensemble in the Cornaro Chapel, Santa Maria della Vittoria, Rome, "The Ecstasy of Teresa." Bernini has given us an image of complete attention and devotion, but one in which the agency of the will has been relinquished. Or consider the more mundane example of the first bud on a dogwood, wholly unexpected after a cold, icy winter. It surprises me by alerting me to a world beyond my own well-managed economy of attention. And, perhaps more perversely, what about all those shiny red notifications on my iPhone that take hold of me? If I imagine myself as master of my digital domain, I'm going to hate myself.

I know Jacobs is acutely aware of the limitations of such a distributive model of attention. He asks, for example, in Thesis 9, whether different phenomena require different forms of attention. There are, he suggests, different ways to attend to particular objects at particular moments—without "giving" or "paying" attention. And it's these other forms, in which an agent doesn't simply manage her attention, that seem just as crucial to making sense of how we inhabit our world.