In his 79 Theses, Alan Jacobs hits upon one of the most important transformations affecting the technology of writing today. “Digital textuality,” writes Jacobs in Thesis 26, “offers us the chance to restore commentary to its pre-modern place as the central scholarly genre.” One could remove “scholarly” from this sentence and still capture the essential point: In the interconnected, intergalactic Internet, everything is commentary.

For Jacobs, commentary is about responsiveness and the way we encode ethics into our collective electronic outpourings. Nothing could feel further from the actual comments one encounters online today. As Jacobs points out, “Comment threads seethe with resentment,” not only with what has been written, but with their secondary status as emotions, or rather one emotion. In a world where we imagine writing to be about originality, the comment can only ever be angry. In response, we either turn them off (as is the case with this blog). Or we say “No comment.” Withholding commentary is a sign of resistance or power.

Of course, this was not always the case. Commentary was once imagined to be the highest form of writing, a way of communing with something greater than oneself. It was not something to be withheld or spewed, but involved a complex process of interpretation and expression. It took a great deal of learning. 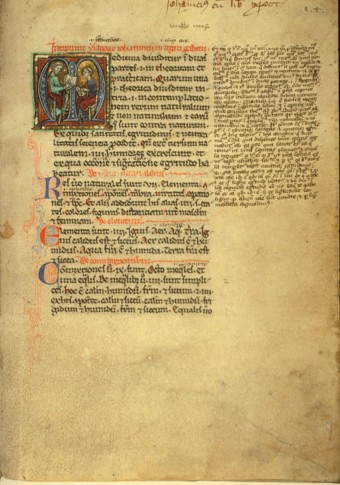 The main difference between our moment and the lost world of pre-modern commentary that Jacobs invokes is of course a material one. In a context of hand-written documents, transcription was the primary activity that consumed most individuals’ time. Transcription preceded, but also informed commentary (as practiced by the medieval Arab translator Joannitius). Who would be flippant when it had just taken weeks to copy something out? The submission that Jacobs highlights as a prerequisite of good commentary—a privileging of someone else’s point of view over our own—was a product of corporeal labor. Our bodies shaped our minds’ eye.

Not all is lost today. While comment threads seethe, there is also a vibrant movement afoot to remake the web as a massive space of commentary. The annotated web, as it’s called, has the aim of transforming our writing spaces from linked planes to layered marginalia. Whether you like it or not, that blog or corporate presence you worked so hard to create can be layered with the world’s thoughts. Instead of writing up here and commenting down there, it reverses the hierarchy and places annotating on top. Needless to say, it has a lot of people worried.

I personally prefer the vision of "annotation" to commentary. Commentary feels very emulative to me—it tries to double as writing in a secondary space. Annotation by contrast feels more architectural and versatile. It builds, but also branches. It is never finished, nor does it aim to be so. It intermingles with the original text more subtly than the here/there structure of commentary. But whether you call it annotation or commentary, the point is the same—to take seriously the writer's responsiveness to another person.

Missing from these models is pedagogy. The annotated web gives us one example of how to remake the technology of writing to better accommodate responsiveness. It’s a profound first step, one that will by no means be universally embraced (which should give us some idea of how significant it is).

But we do not yet have a way of teaching this to new (or old) writers. Follow the curricular pathways from the lockered hallways of elementary school to the bleak cubicles of higher education and you will still see the blank piece of paper or its electronic double as the primary writing surface. The self-containment of expression is everywhere. It is no wonder that these writers fail to comment well.

It’s all well and good to say commentary is back. It’s another to truly re-imagine how a second grader or college student learns to write. What if we taught commentary instead of expression, not just for beginning writers, but right on through university and the PhD? What if we trained people to build and create in the annotated web instead of on pristine planes of remediated paper? Now that would be different.

Andrew Piper is Associate Professor and William Dawson Scholar in the Department of Languages, Literatures, and Cultures at McGill University.