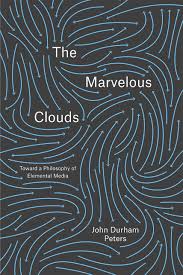 This fall—after a summer’s repose that lingered, we confess, too long into autumn—the Infernal Machine will be considering Peters' larger, more ambitious project. For if media are elemental, if the philosophy of media needs a philosophy of nature (or even, as Peters claims, a philosophical anthropology), then media inquiry concerns not just the latest social media product or the history of print. Media inquiry concerns the very relationship between humans and nature—the ways that humans, in their frailty and finitude, struggle with all available techniques and technologies to make their way in the world. For Peters, media inquiry is an ethical project.

But first, let‘s discuss the claim “media are elemental.”

This fall, one of us spent a day touring three of the Smithsonian museums in Washington, DC: the National Museum of Natural History, the National Museum of American History, and the Air and Space Museum. Only the last seemed to make “sense.” That is, only the Air and Space Museum offered a relatively coherent narrative. Moving from room to room, the museum’s story was fairly straight forward. From early-modern seafaring, to the Wright brothers, to World War II aerial combat, to nuclear deterrence, to the age of unmanned aerial vehicles, the world has been caught up in an age of ineffable aeronautical adventures. And the United States is the late-modern vanguard. Emblazoned on the tails of fighter jets and the bellies of missiles was the national story of technological flight.

Walking through the National Museum of American History, on the other hand, made no such sense. There was no coherent overall narrative. It was strictly an episodic experience, like watching the History Channel for a day. (No surprise: The History Channel is a prominent museum sponsor.) The National Museum of Natural History—dedicated to the cultural keeping of “nature”—was even more fragmented. Offering no history, no narrative, it simply assembled a pastiche of stuffed mammals, winged butterflies, arctic photographs, and tropical fish around an acquisitive centerpiece, the Hope Diamond.

After leaving the Mall and its museums, this tourist left with a clear message: Technological innovation is the only shared story that makes sense anymore. Neither the “imagined community” of the nation-state nor the Earth, which for aeons has grounded humans narratively and otherwise, has the symbolic power to make history cohere, at least in the United States. Even natural scientists, as the Museum of Natural History made clear, are engineers taking flights into the statistical improbabilities of human evolution and considerably warmer futures. “History” is technological innovation, a story told best through the marvels hanging from the ceilings of the Air and Space Museum.

To claim, as Peters does (though, in fact, he never says it quite this way), “media are elemental” is undoubtedly to take up the cause of landing media inquiry (of which “technology” is a crucial sub-concept) back on Earth—to make a return flight, so to speak, to the mundane, even if by way of the marvelous. If technology is less a means of flight than grounding, what does this mean for our shared stories, identities, quests, and concerns? If technology is the means by which humans struggle to modify themselves and their environment to make their world inhabitable, then what does this mean for our theories of technology and media?

So, as we kick back into gear after a too-long summer hiatus, among other things on the Infernal Machine we'll be inviting a variety of colleagues from a variety of disciplines to consider Peters' Marvelous Clouds and, moreover, to explore the claim, and the case, that media are elemental. Stay tuned! Posts will start rolling later this week.