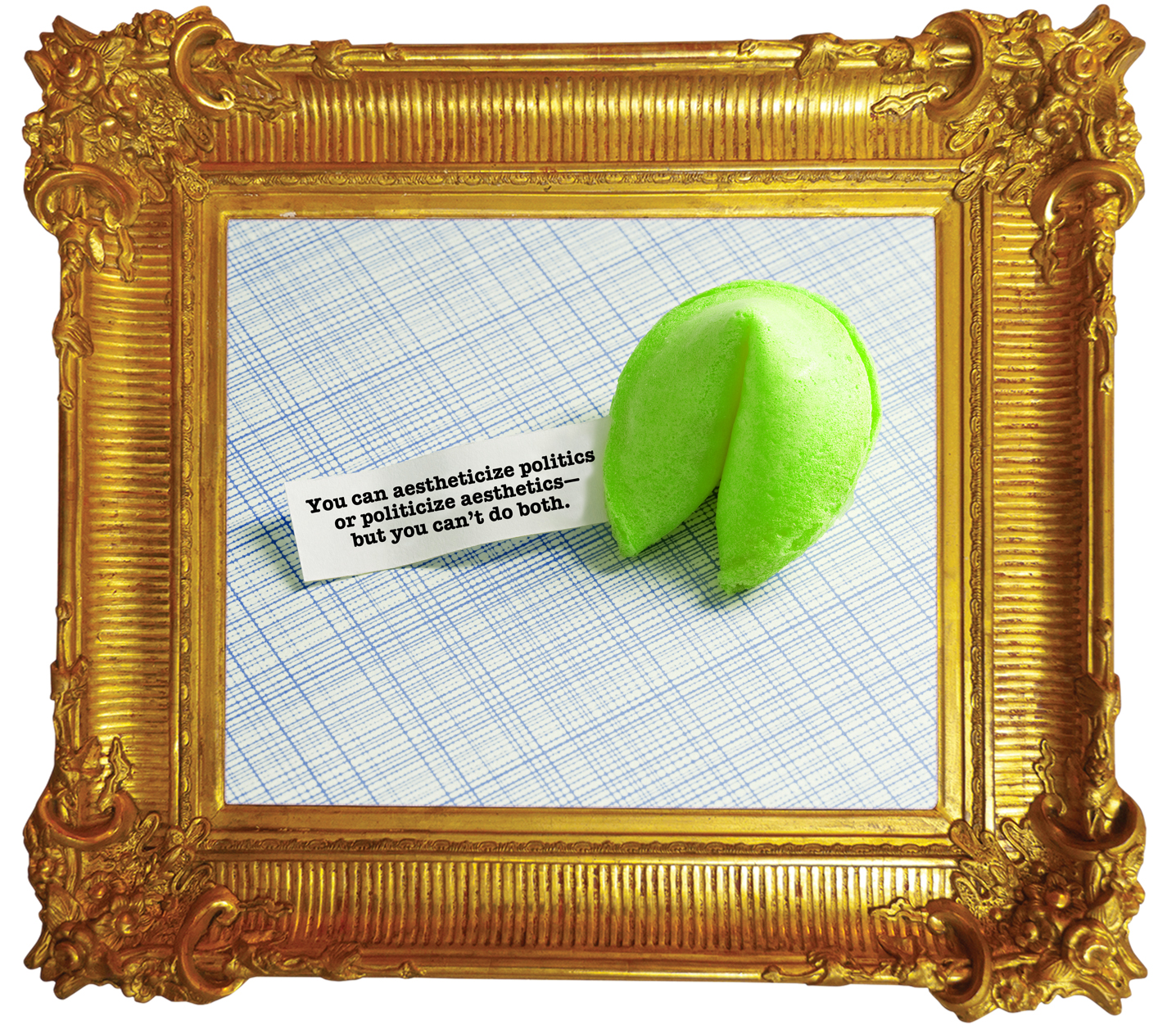 It was widely reported last month that Andrew Breitbart’s protegé Steve Bannon had said at the Conservative Political Action Conference that his goal was the “deconstruction of the administrative state.” The phrasing caused humanities professors and journalists alike to do a double take. Matthew Yglesias wrote at Vox, “[Bannon] presumably meant that he wants to destroy the administrative state, not apply literary theory inspired by Jacques Derrida to it.”

Or did he? What if Breitbart’s media empire, which grew from the slogan “politics is downstream from culture” (see Part 1), was based precisely on ideas that come from the lexicon of critical theory, literary theory, and media theory? That would go a long way toward explaining why the White House is flatly denying that it colluded not just with Russians but also with Internet trolls, those denizens of viral content-production.

Bannon’s right hand is Julia Hahn, a University of Chicago graduate who wrote her senior thesis on “issues at the intersection of psychoanalysis and post-Foucauldian philosophical inquiry,” influenced by poststructuralist queer theorist Leo Bersani. After decades of the far right attacking academia both institutionally and symbolically, it’s hard for us to imagine Bannon doing more than sneering at “the Cathedral” or “the Complex” (cartoonish alt-right names for the left-wing conspiracy that supposedly extends from Ivy League ivory towers to Hollywood). But Hahn isn’t Bannon’s only source for literary theory. The other is none other than his mentor Andrew Breitbart, who devoted a chapter of his 2011 book Righteous Indignation to “cultural Marxism.”

The term “cultural Marxism” is modeled on the notion of “cultural Bolshevism,” a Nazi conspiracy theory in which Jews and Soviets were said to be working together to lay low central European civilization. “Cultural Marxism” is, in that context, a dog-whistle for anti-Semites, as both historian Martin Jay and the Southern Poverty Law Center have argued. The phrase focuses on the Frankfurt School, the group of cultural theorists and sociologists who used Marx-inspired analysis to attack Hitler and capitalism alike, critiquing especially cultural and mass media institutions. With those ends in mind, they formulated the notion of critical theory, which had the goal not of “representing” the world, like most philosophical theories, but of changing it. The leaders of this movement—Theodor Adorno, Max Horkheimer, Leo Löwenthal, and others—fled the Nazi regime, finding refuge in places like Breitbart’s hometown, Los Angeles. Breitbart wonders at their ability to remain critical in sunny California, and accuses them of having infected the West Coast and eventually the whole country with Marxist ideas.

What unites critical theory is a critique of capitalism based in the analysis of society and culture. Its advocates argued that capitalism was more than an economic form, and that the exploitation that Marx had identified at its core permeated narrative, media, even perception. Adorno and Horkheimer developed one variant of this argument together, trying to show that even the way we look at the world is not neutral, but colored by commodity exchange and the “instrumentalization” of humans and human relationships. This created a feedback loop: Our capitalist understanding of the world met with empirical confirmation, because our perception was informed by that understanding in the first place. If one wanted to resist capitalism, one would have to change that perception itself, and that meant changing culture and its media.

Andrew Breitbart’s account of “cultural Marxism” is breathtaking, or at least breathtakingly weird (watch him explain it here): Playing the role of an intellectual historian, he argues that first Hegel and Marx created a great evil, the “Rousseau-ian” doctrine in which state and community are bound together too tightly to allow for individual freedom. Breitbart adds that Theodore Roosevelt and Woodrow Wilson made the United States “Marxist” by allegedly placing the collective above individual freedom. This in turn generated a political atmosphere that was ripe for the arrival of critical theory, “a theory of criticizing everyone and everything everywhere. It was an attempt to tear down the social fabric.” (It’s hard to say if this is an intentional reference to Marx’s youthful essay, “For a Ruthless Critique of Everything that Exists.”) The great success story of critical theory, according to Breitbart, is Herbert Marcuse, whose ideas about sexual emancipation were responsible not only for the sexual revolution but also for performance art “and Susan Sarandon” (this was, of course, before her Trotskyist advocacy of Trump as a negative “awakening force” in 2016). Marcuse, Righteous Indignation tells us, was trained by Martin Heidegger, “the father of deconstruction,” and apparently also the founder of critical theory. The Frankfurt School had “weaponized the cloudy bacteria of their philosophy into full-bore ideological anthrax,” moving from the philosophical page to the lecture hall, the movie theater, and the home. Marxism, in this bizarre version of events, became the secret culture of the United States. Breitbart’s diagnosis is now a widespread belief on the alt-right.

Many establishment conservatives neither know nor care about the Frankfurt School, and they view Breitbart News as a departure from more moderate views. But even if Breitbart could not persuade all conservatives, he still shaped political and cultural debate. And his attempt do this, to set the terms and platforms for how political discourse operates in a media-saturated environment, is something he borrowed from the Frankfurt School.

Righteous Indignation demonstrates a loose grip on intellectual history—Heidegger wasn’t part of deconstruction (much less of the Frankfurt School; he and Adorno carried out vicious polemics against each other after the war), and Antonio Gramsci, whom Breitbart invokes several times, wasn’t a member of the Frankfurt School at all—but that’s not the point. Breitbart was intent on showing that mid-twentieth century American conservatives stood by while Adorno, Marcuse, and others on the left quietly slipped communism into the American mind. How? With the complicity of the media, as Breitbart aimed to show in his 2004 book (with Mark Ebner) Hollywood, Interrupted.

With the media mastered, according to Breitbart, the theorists consolidated their gains through community organizing. The anti-hero of Breitbart’s story is Saul Alinsky, whose Rules for Radicals has been a standard for left-wing activists since its publication in 1971. Breitbart writes in Righteous Indignation, “It took Alinsky to put the Complex totally into effect. Every successful interest group and social movement in the United States since the 1960s has used Frankfurt School ideology and Alinsky rules. It’s tragic it has taken conservatives so long to realize it.” Breitbart’s grudging sense of admiration for Alinsky is palpable. The reach of “cultural Marxism”—by way of Alinsky—extended as far as a young senator from Illinois who claimed that his years as a grassroots organizer were “the best education I ever had, better than anything I got at Harvard Law School.” According to Breitbart, there was a direct connection between Hegel’s Philosophy of Right and its celebration of the state, Barack Obama’s background as a community organizer, and the Affordable Care Act.

Breitbart’s slogan “Politics is downstream from culture” takes theoretical insights from “Marxists” and reverse-engineers them for the right. Powered by the media empire he founded, Breitbart introduced a conviction into far right circles that the Frankfurt School had been correct: “As it stands, the Frankfurt School…is fighting the political battle on both the political and the cultural battlefields. Conservatives are fighting it only on the political battlefield.” But today, conservatives have taken the fight to the cultural battlefield. Breitbart, and Bannon after him, believe that to counteract the large-scale (and very fuzzy) conspiracy, they would need to foster an anti-Marxist counterculture, one that would refashion narratives (as Breitbart did in Righteous Indignation) and repurpose media to influence hearts and minds through movies, pop music, and, crucially, the aesthetic and political tinderbox of social media, especially Twitter and messageboards like Reddit and 4Chan.

Hollywood remains stubbornly liberal, but by repurposing social media, Breitbart and his followers created an effective channel to influence and manipulate political discussion, and politics itself. That’s not so far from what the Frankfurt School suggested, and the resemblance hardly seems accidental. Walter Benjamin, for example, famously argued that the left should “politicize aesthetics” in response to a fascism that aestheticized politics. For Benjamin, the medium for that work was film. For Breitbart and his followers, a complex multimedia landscape is the means to politicize aesthetics to a very different end. By recognizing that goal and the most effective means to it, Breitbart reversed the intent of critical theory dramatically while borrowing its central insight.