The Author in the Age of Digital Distribution

Sarah Ruth Jacobs is a founding editor of the open-access Journal of Interactive Technology and Pedagogy and a doctoral candidate in American literature at the Graduate Center of the City University of New York. 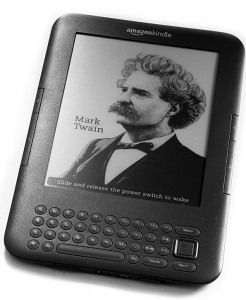 In the Amazon v. Hachette battle, authors seem to have assumed the role of largely passive onlookers, idling nervously on the sidelines until the two giants come to an agreement on the price of ebooks. On the Amazon front, the myth that the online retail giant is a warm, author-friendly company was dealt a further blow when J. K. Rowling became a casualty in the battle. As for Hachette, the determination to sell ebooks for $11.99 appears to be an increasingly quixotic stand against the tides of the modern literary marketplace.

But what if authors were able to gain greater agency in deciding where, how, and at what price their books were sold? What if authors didn’t need to agree to Amazon’s exclusive, one-size-fits-all royalty and sales agreement or sign away their rights to publishers? We might not be too far away from a shared open-source platform on which authors could sell their own work, cutting Amazon out of the equation and reducing the negotiating power of publishers. The recent protest letter signed by 900 authors shows that the time is ripe for a new, author-centric paradigm.

Amazon isn’t solely to blame for the plummetting price values assigned to books. The distribution of books has become so efficient that its profitability has been drastically reduced—the book market has undercut itself. At the same time, the appeal of social and visual media has contributed to the rather sluggish status of literary reading. In this media-saturated climate, the most successful authors are the ones who can ruthlessly grab and hold readers while triumphing across media. The Hunger Games, for instance, has a plot that is based on reality television and televised spectacle—a text that begs to be filmed. Authors have never faced so much competition in the form of free media, nor have they ever encountered such low barriers to distribution of their work. Rather than the death of the author, this ethos dictates the birth of scaled, income-based, and potentially author-driven digital pricing and distribution models.

We can hate Amazon as much as we want, but the company has turned publishing on its head. Although most self-published authors earn very little, there are now few barriers to entry and authors can earn, according to Amazon Kindle Direct Publishing, “up to seventy percent in royalties.” Yet, Amazon offers only an illusion of authorial control. In the background, Amazon programmers ensure that the “results generated by Amazon’s search engine are partly determined by promotional fees.” Furthermore, Amazon’s Kindle Direct Publishing agreement restricts authors from selling their digital books anywhere else.

However, many writers and artists are bucking Amazon’s monopoly. Tech writer Gwen Bell has been selling her writing directly from her website for years. Deadmau5 is the latest artist to go where Louis C.K. in 2011 and Stephen King back in 2000 went before: He announced on Reddit his intention to release his music through his own digital subscription service with different price points. Even the reclusive comic book artist Alan Moore has raised more than £60,000 through Kickstarter and proclaimed that crowdfunding will shape the future. The ability to demonstrate the monetary demand for a book even before it is published puts a good deal of power in the hands of authors, who may be able to bargain harder to control their own rights.

Open-source, distributed peer-to-peer networks and free software can easily link together authors’ individual sites and offerings. In an author-centric model, editorial work, marketing, and the stamp of the respected publisher would be secondary to the agency and established fanbase of individual authors, who would boast greater control of their works and proceeds. Rather than publishers and Amazon’s search algorithms acting as the filters, listings could be based entirely on user ratings in a manner similar to sites such as Reddit and Buzzfeed. In fact, we could even take this direct-sales model a step further and imagine a future in which books are crowd-edited or collaboratively written, with the author changing the text in response to readers’ comments.

Whether a work is distributed by a company or an artist, pricing models must be adjusted to the reality of digital distribution. More specifically, each product should have a variety of price points. For example, I live in Morocco, a “developing” country, and in my city, Rabat, there is an enormous market for pirated DVDs. One can walk through the old market and buy any movie or TV series for 6 dirhams, or about 73 cents. That price is appropriate for a country in which most citizens can’t afford to buy a full-priced DVD or go to the movie theater. If movie distribution companies or individual artists adjusted their pricing models, then they could compete in and capture developing markets. We have entered a Brave New World in which one price cannot serve all, and sales points need to be calculated and contextually negotiated. And even beyond flexible price points, there is the possibility of ongoing “public patronage” in which the public “subscribes” to an individual artist. Surely, it is only a matter of time before sites like Gittip, which allows users to donate a minimum of 25 cents a week to members of the technorati, expand to cover authors and artists.

When, more than three quarters of a century ago, social critic Walter Benjamin wrote The Work of Art in the Age of Mechanical Reproduction, he claimed that reproducing a work would make it lose its uniqueness and context within an artistic tradition, its “aura.” Whether a digitally reproduced work of art or writing lacks uniqueness and resonance is perhaps debatable, but what is clear is that the process of digital distribution has generated new opportunities for the creator and her works. Concerning the question of artistic tradition, the internet and digital distribution have brought us even closer to artists and the context of their work—we have access to their daily lives through Twitter, and we can often Tweet questions to them or participate in a Reddit Ask Me Anything thread. While companies and managers can do a lot to position new talent, many rising stars are crowd-propelled in a way that was unimaginable a decade ago. We are in an age in which someone like pop singer Rebecca Black can be transformed into a celebrity, praised, attacked, and then abandoned within a few months. In fact, reality television and celebrity gossip blogs are opposite sides of the same impulse—to elevate reality and pull down celebrity until there is no distinction. Just as Benjamin foresaw, “At any moment the reader is ready to turn into a writer,” or the patron into an artist.

Authors no longer need publishers to distribute their work, to gauge readers’ interest, or to build a fan base, and many authors have already decided that they don’t need Amazon. This is not to say that authors don’t need publishers or a strong online distribution platform. Rather, the few authors who can guarantee their sales numbers have a lot more power when it comes to releasing or holding onto their rights. One example is Hugh Howey, a self-published author who turned down a seven-figure deal with Simon and Schuster in order to retain control of his digital rights (he instead “settled” for six figures). In this age of increased competition and pricing, authors might negotiate more intensely with their readers and their publishers to maintain control over the pricing and rights for their work.

But Hugh Howey might well be the exception. What if, as Scott Turow fears, authors cannot adjust to the challenges of online distribution and piracy, leaving us with a system that rewards a writerly 1 percent of a few winners and lots of losers? One possible consequence is that idealistic, imaginative, and socially engaged members of our generation will feel compelled to make a more direct and practical impact on the world—rather than writing about social inequality, they might be “forced” to take jobs as policy-makers, for example. In fact, with the collaborative and interdisciplinary mentality behind many crowdfunded projects, such possibilities have already emerged. Art expressing itself in the world: That might not be such a bad outcome, after all.