Above and below: Fresh graffiti at the Phi Kappa Psi fraternity house, University of Virginia, November 20, 2014. Photos: Gregory Thompson

Last week I wrote a post titled "Who Needs Captains of Erudition?" Long before “corporatization” had become synonymous with higher education, Thorstein Veblen, the early twentieth-century American sociologist, dismissed American universities as little more than “competitive businesses.” These enterprises were run by university presidents, who had become little more than managers of systems, chiefs of concerns, "captains of erudition."

When I read President Sullivan's response to a Rolling Stone article that recounted a University of Virginia woman's personal story of gang rape and the trauma that followed, all I could hear was the defensive, disengaged chatter of one of Veblen's captains:

"I am writing in response to a Rolling Stone magazine article that negatively depicts the University of Virginia and its handling of sexual misconduct cases."

"Negatively depicts"? If one phrase embodies the corporatization of the university that might well be it. The contemporary university's assessment metrics, use of adjunct labor, obsession with economic efficiency, and capitulation to the sovereignty of the student as consumer are just consequences of a deeper failure of moral imagination. The primary concern is with public perceptions. Never mind that a young woman felt that her only option was to talk to a Rolling Stone reporter. This is the language of an institution committed to nothing but its own mechanisms. There is no evidence of the virtues to which we here at the University of Virginia lay claim—empathy, civic concern, leadership, and curiosity. 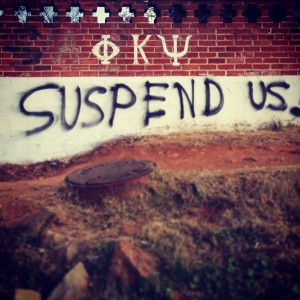 Sullivan's statement was a missive from the bureaucratic bowels of an accounting machine. It was surely manufactured by public relations specialists and lawyers whose interests are simply fiduciary, concerned only with legal liability and fundraising. There are no people, just "interests"; no judgments, just "initiatives"; no moral failures, just "issues." There were, as one of my colleagues put it, no rapes, no victims, no women, no perpetrators—just "issues related to sexual misconduct." And the only response is more policies, more initiatives, more accounting.

The captains of erudition are firmly at the helm at the modern American university. With their phalanx of managers, they are guiding us into seas of indistinction, into a future where the university is just another modern bureaucracy without ends, without purpose. And the faculty is asleep on the deck.