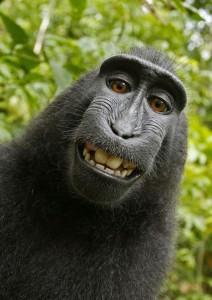 In 2011, British photographer David Slater was working in Indonesia when some mischievous macaques bumped his camera and set off a whirring noise that caught their attention. The macaques investigated and began taking hundreds of out-of-focus images. However, one inquisitive female did succeed in taking a sharply focused self-portrait with a winning toothy smile (at right). In short order, Slater sold the photos to Caters News Agency Ltd., an independent news and photo agency in the UK. The smiling macaque photograph went viral and found its way to Wikipedia. For the past few years, Slater has been involved in a lawsuit against Wikipedia, objecting that the image has been absorbed into its more than 22 million piece inventory without his permission and without compensation.

Slater claims that the free use of this image is damaging his income and requested in January 2014 that Wikipedia remove the image. As of today, one of Slater’s images—or rather, another of the macaque’s self-portraits—is still there. Wikipedia claims the right to display the photograph under the Creative Commons license. (Creative Commons, according to a guide on the Harvard Law School website, is a nonprofit that facilitiates sharing and reuse of knowledge via free legal and technological tools: “These tools are not alternatives to copyright laws, rather they work alongside them.”) In its entry for the Celebes crested macaque, Wikipedia gives the photo credit as public domain, and when one clicks on the image (a non-smiling macaque), the source is given as Daily Mail; the English description reads “Self-portrait of a female Celebes crested macaque (Macaca nigra) in North Sulawesi, Indonesia, who had picked up photographer David Slater's camera and photographed herself with it.” The link to the Daily Mail article, “Cheeky Monkey!” (July 4, 2011), apparently published before the ruckus, details the monkeys'  antics during Slater's trip. This article includes a second photograph, also taken by a macaque, of another monkey grasping Slater’s finger.

Slater is back in the news and many commentators, with varying degrees of seriousness, are weighing in on the issue of who owns the copyright. Slater laughingly says that “If the monkey took it, it owns copyright, not me, that’s [Wikipedia’s] basic argument. What they don’t realize is that it needs a court to decide that.”

According to an August 6 article in The Telegraph, Wikipedia “‘does not agree’ that the photographer owns the copyright, but also that US law means that ‘non-human authors’ do not have the right to automatic copyright of any photographs that they take. . . . To claim copyright, the photographer would have had to make substantial contributions to the final image, and even then, they'd only have copyright for those alterations, not the underlying image. This means that there was no one on whom to bestow copyright, so the image falls into the public domain."

Bartleby-like, Wikipedia prefers not to agree that the photographer owns the copyright and so consigns it to the public domain presumably without consulting Slater. (It is likely that any rights appertaining to Slater's photos are owned in some degree by the Caters News Agency to whom he sold the images whole or in part.)

Rather, it might be more instructive to consider the degree of Slater's authorship in these images, or in the words of Wikipedia's lawyers, to what degree the photographer's “substantial contributions to the final image” affect his relationship to them.

No one disputes that Slater invested time and money to travel to Indonesia with the purpose of generating income. What role did his expertise and equipment play in his ability to generate viable images? Typing this as I am on my employer’s equipment, this question has a unique resonance. The writing, research, and expertise that I bring to the task would be useless if I did not have the machinery to advance my project. Very well, but who owns the copyright to what I’m writing? I would assert that as the author/writer/creator of this creative content, it is my property and I own the copyright. U.S. copyright law affirms this, unless I chose to relinquish all or part of the work to another entity.

But what if three chimps showed up at the office one day and began typing away and created, let’s say, Hamlet (with apologies to playwright David Ives who portrayed this very thing hilariously in Words, Words, Words). It wouldn’t be a copyright infringement for the chimps to type out Hamlet unless, of course, they claimed it as their own work, in which case it would be plagiarism. But what if they created a unique literary work, perhaps even a blog post, on my machine and I published it as my own work. Could the chimps rightfully sue for copyright infringement? Would they even have legal standing as authors?

Setting aside the absurdity of this premise and returning to the macaque’s selfie, let's look at some circumstantial details of Slater’s case. Without sounding too species-centric, had Slater been photographing human subjects, he would most likely have required a model release in which the subject grants the photographer some degree of legal use. I think we can safely assume that Slater did not present, nor did he receive, a signed model release from any of the inhabitants of the North Sulawesi macaque preserve.

What of his presence among the macaques at the Indonesian preserve of Selamatkan Yaki? Was he a nuisance, or did his efforts further the cause of species preservation? According to its website, Selamatkan Yaki is funded in part by ecotourism and has regulations in place to protect the monkeys from injury, disease, and excessive contact with neighboring human communities. “Despite their natural curiosity,” writes program manager Harry Hilser, “we advise all visitors to keep a distance of five meters, as dictated by the Code of Conduct produced by the Indonesian Forestry Department.” In a video on The Telegraph dated August 6, 2014, Slater says, “The monkeys followed me around, I followed them around, they got used to me, and they eventually started grooming me.” From this statement, one could conclude that Slater definitely violated the park’s distance policy, was perhaps a nuisance, and, to a degree, invaded the macaques’ privacy.

For three days, Slater hoped for what he called the "perfect shot"—one of the macaques full in the face. “I realized,” Slater told The Telegraph, “that it wasn’t going to happen, not unless they took the photograph themselves.” He set up a camera on a tripod with a cable release and let nature take its course. The macaques, naturally intelligent and inquisitive, became intrigued by the camera and pressed the button. After all, they had seen him doing something similar for several days. In this writer's opinion, authorship of the selfie in question belongs to the macaque; as for copyright, I'd like to argue that it is shared by both the macaque and Slater who both made “substantial contributions to the final image."

The International League of Conservation Photographers (ILCP), a nonprofit organization that aims to “to further environmental and cultural conservation through ethical photography,” supports Slater’s position, arguing that the photographer and his images are part of larger mission—that of conservation of endangered animal species. The ILCP argues that even though Wikipedia may be operating legally within U.S. copyright law, they should recognize the difference between what is legal and what is right. Wikipedia should act, asserts ILCP, according to the photographer’s wishes and the issue of copyright need not enter into it.

It may not be possible to assess copyright ownership with finality in this case, although one can assert that the photographs would not have been possible without Slater, his expertise, and his equipment. If the episode draws some much needed attention to the plight of an endangered species, so much the better. However, we need never worry about the extinction of the litigious homo sapiens.